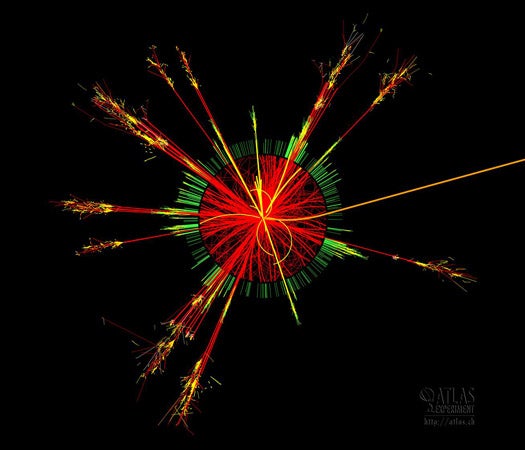 Smashing protons at high energies is fun and all, but researchers at the Large Hadron Collider are taking a vacation from their day-to-day proton smashing, and taking a trip back to the very origins of the universe. Starting this month and continuing for four weeks, the LHC will accelerate and then collide lead ions – that is, entire atomic nuclei – to create a series of miniature Big Bangs that will let researchers take a look at the quark-gluon plasma that existed just a fraction of a second after the universe was born.

The proton collisions conducted thus far have generated mountains of data for researchers by producing new and different particles, some of which may have never been seen by scientists before (like the elusive and theoretical Higgs boson). But the lead ion collisions will be different; because lead ions are composed of complete atomic nuclei – not just a single subatomic particle – their masses are far larger. Plug more mass into Einstein’s most famous equation and the energy produced increases as well.

Those higher energy ion collisions are short in duration but long on heat. In fact, they should be the hottest collisions created yet. Brookhaven National Labs’ Relativistic Heavy Ion Collider has conducted similar experiments with gold ions and reached 4 trillion degrees Kelvin (250,000 times hotter than the sun’s core). The LHC’s mini Big Bangs should be even hotter.

Why generate this kind of heat? Because that’s how hot the universe was thought to have been just after the Big Bang. At that brief time, some 13.75 billion years ago, matter didn’t exist as the solids, liquids, and gasses we are familiar with, but as a kind of quark-gluon soup. The heat from the Big Bang literally melted the nuclear matter of atoms, releasing the particles inside (like gluons and quarks).

At least, that’s what science says the dawn of time looked like. We haven’t seen it up close because Big Bangs aren’t something that occur every day. But with a little luck, CERN researchers will be serving up some quark-gluon soup in short order. Get it while it’s hot.