The milestones just keep coming over at the Large Hadron Collider. The latest: CERN researchers have glimpsed for the first... 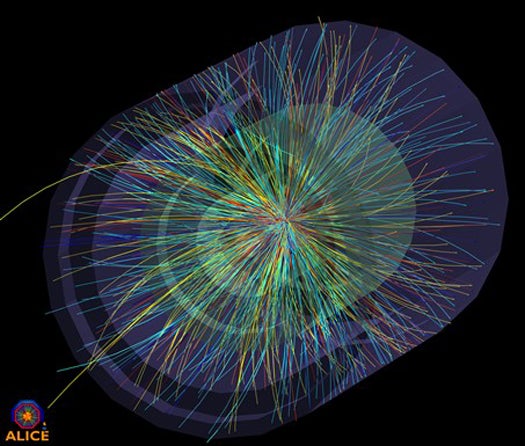 This is an offline reconstructed event from the GRID, showing tracks from the Inner Tracking System and the Time Projection Chamber of ALICE.
SHARE

The milestones just keep coming over at the Large Hadron Collider. The latest: CERN researchers have glimpsed for the first time the so-called quark-gluon plasma that existed in the early universe before things cooled enough for neutrons, protons, and all the matter in the universe as we know it to form. Via heavy lead ion collisions underway at the LHC over the last month, researchers have recreated the conditions in the universe just a billionth of a second after the Big Bang.

The results – publishing in the journal Physics Review Letters – come just three weeks after CERN researchers began circulating heavy ions through the LHC, an impressively swift feat by just about any scientific standard. In some respects, researchers found just what they thought they might by creating these mini Big Bangs: quarks and gluons unbound, roaming freely in a sort of subatomic soup. But the way they are observing this quark-gluon plasma is revealing new phenomena for the first time as well.

When protons are smashed in the LHC, they usually emit two back-to-back jets as the constituents of atomic particles – gluons and quarks – fly outward from the point of collision. But in heavy ion collisions, the jets interact quite differently. The LHC’s detectors show the jets interacting with each other at the center of the hot dense medium created by the collision, with the energy of one or both jets degraded. Usually only one jet is visible – the other essentially melts on its way through the collision region.

Known as “jet quenching,” this behavior has never been directly observed before, and studying it could present all kinds of insights into the behavior of the quark-gluon plasma that is essentially the primordial soup of the universe. That in turn should shed light on what the universe was like during those early millennia when conditions were too hot and tumultuous for matter as we know it to form.