Our columnist heads to the Far East to prove that he's the world's greatest mad scientist. 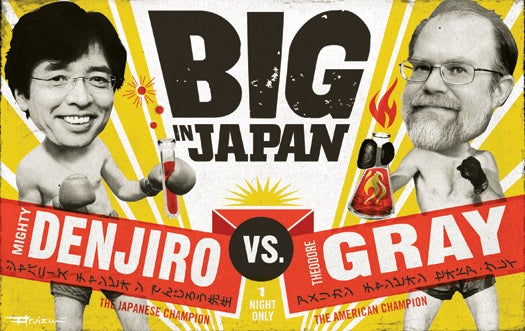 Japanese TV shows can be really bizarre, so it was with some trepidation and a good bit of background research that I accepted the invitation to appear on The Most Useful School in the World, a show hosted by Mr. Sakai, a sort of Japanese Dick Clark. The show involves “teachers” giving classroom lessons to “students” who are actually minor celebrities. I was a teacher for the science class. But the real point of the segment was a battle for the title of “Best Science Demonstrator” between the great Denjiro-sensei, a Japanese scientist and media personality, and me, Theo-sensei, come all the way from the U.S. to defend the honor of American mad scientists. (Seriously, that’s what it said in the script.)

We did four experiments, but my favorite was when I spread small soap bubbles filled with a mixture of butane and hydrogen along a line of outstretched hands belonging to a spectrum of those minor celebrities. When I lit one end of the line of bubbles, a flame swept rapidly from one hand to the next. What we didn’t tell anyone was that the bubbles in the last hand were different. They contained a mixture of hydrogen and oxygen, which exploded rather loudly. The last person in the line jumped up and staggered around, terrified, while the audience roared.

The script called for Mr. Sakai to declare the match a draw, so we never officially determined who was the better Science Demonstrator. Still, I learned a lot from the experience, especially the great appreciation the Japanese have for the value of doing science at home. In Japan you can buy hydrogen gas for your experiments in cans that look just like hairspray except that they say “hydrogen” on them. The Tokyu Hands department store has a whole aisle of home lab supplies, including beakers, Bunsen burners and chemicals. You’ve got to hand it to a country where you can buy nearly everything you need to make gunpowder in a chain store (as opposed to ours, where you can buy only the finished gunpowder).

In the coming months I will re-create for you some of the demonstrations Denjiro and I did on the show, though sadly without the theme music or outlandish costumes.