While CERN researchers at the Large Hadron Collider continue to smash protons, create mini Big Bangs, and otherwise probe the... 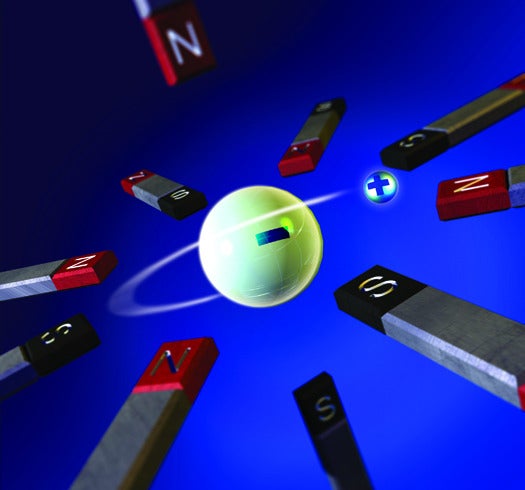 While CERN researchers at the Large Hadron Collider continue to smash protons, create mini Big Bangs, and otherwise probe the fundamental fabrics that make up the universe, other less-publicized CERN experiments are yielding big results as well. A team of researchers working at CERN’s Geneva labs has succeeded in trapping antihydrogen atoms – the antimatter equivalent to hydrogen – for the first time.

Antihydrogen has been created in the lab before – at CERN actually, back in 2002 – but those atoms existed for just a few fleeting microseconds before doing what antimatter does best: colliding with normal matter (in this case hydrogen atoms) and, in a flash of gamma rays, ceasing to exist. The ability to trap them could lead to range of antimatter experiments that could explain just exactly why antimatter – created in equal parts as normal matter during the birth of the universe (or so the theory goes) – is for the most part absent today.

That in turn could upend modern physics as we know them today, largely undoing the “standard model” of particle physics and sending physicists back to the drawing board. If anitmatter is discovered to be different than scientists think it is (they think it is symmetrical – that is, if you flip all the charges and locations of particles in a given interaction and reverse time, the interaction will look the same) it could be really disruptive to science as it stands today.

Naturally, the means of trapping antihydrogen atoms is complex, but the researchers essentially start with cooled and compressed antiprotons that they slowly nudge into a cloud of positrons where they fuse to form antihydrogen. This mating ritual takes place inside of a magnetic bottle that uses a specially designed magnetic field created by an octupole superconducting magnet to keep them from immediately annihilating themselves.

Not immediately-immediately anyhow; the antihydrogen atoms still only exist for just more than a tenth of a second, but don’t let their short lifespan fool you. If CERN researchers can stabilize their tiny antihydrogen atoms long enough to experiment on them, what they learn could be huge.