NASA’s Cassini spacecraft has taken a breath of oxygen while passing over the icy surface of Saturn’s second-largest moon, marking... 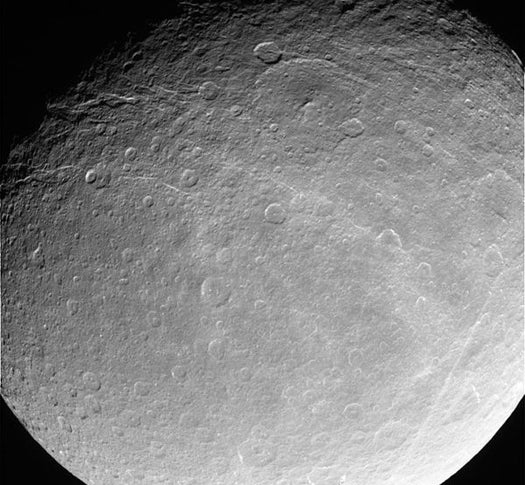 NASA’s Cassini spacecraft has taken a breath of oxygen while passing over the icy surface of Saturn’s second-largest moon, marking the first time a spacecraft has directly sampled oxygen in the atmosphere of another body. Cruising just 60 miles above Rhea, one of more than 60 moons orbiting Saturn, Cassini found an extremely thin atmosphere of oxygen and carbon dioxide likely sustained by high-energy particles slamming into the moon’s frozen surface.

Rhea’s isn’t the only other atmosphere in the universe, but it is so thin that Cassini had to fly through it just to confirm that it was there at all (other atmosphere’s have been detected and studied from afar by tools like the Hubble Space Telescope). According to Cassini’s onboard science instruments, Rhea’s atmosphere contains something like 50 billion oxygen molecules per cubic meter, matched by 20 billion carbon dioxide molecules.

Rhea and it’s larger brother Titan are the only two of Saturn’s moons with enough mass to maintain atmospheres, but Titan’s is largely composed to nitrogen and methane. Exactly where the gasses on Rhea come from is uncertain, though it’s suspected that they might originate from collisions between high-energy particles and water ice on Rhea itself, which is thought to be made nearly entirely of ice.

Rhea’s atmosphere is far too thin – and the moon is far too distant and cold – to have any near-term implications for space missions beyond the usual unmanned variety. But the discovery is significant in that it proves that chemistry involving oxygen occurs naturally elsewhere in our own solar system, and could be quite common outside of it as well.