The U.S. may be years behind some European nations and China when it comes to taking advantage of solar power... 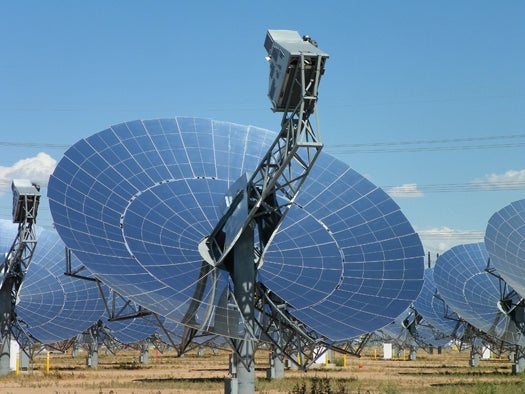 The U.S. may be years behind some European nations and China when it comes to taking advantage of solar power tech, but even global superpowers have to start somewhere. Secretary of the Interior Ken Salazar has approved the first large-scale solar energy projects to be built on public lands, a first step in unlocking the acres upon acres of federal and state managed real estate for clean energy production.

The approval paves the way for two projects: The Imperial Valley Solar Project managed by Texas-based Tessera Solar, a 6,360-acre site that will harvest up to 709 megawatts from 28,360 solar dishes, and the Chevron Lucerne Valley Solar Project, managed by Chevron and pulling in up to 45 megawatts from 40,500 solar panels. Together they will be able to power somewhere between 226,000 and 566,000 typical homes.

Both projects were approved under what the Department of the Interior calls its “fast track” program, though those who have been waiting for years for bureaucracy to catch up with both the technology and the times might not care to call it that. But now that they’re approved, the administration does want the companies to get their projects up and running quickly. Under the stimulus act, developers that have their projects under construction by the end of this year qualify for a good deal of public funding – specifically, $273 million for Tessera and $31 million for Chevron.

The slow approval process mostly stems from the fact that most of these public lands are managed for conservation purposes, so they are strictly governed by rules regarding the environmental ramifications of any construction taking place there, even seemingly green construction like solar farms. Both projects survived rigorous environmental review and must take extensive actions not to disrupt surrounding ecosystems. But it the projects can get off the ground without causing an oil spill or otherwise fouling their sites, they could serve as important proving grounds for further green energy development elsewhere on public lands.

Perhaps its no coincidence this announcement came on the same day Energy Secretary Steven Chu also announced the White House will become a source of solar power, receiving photovoltaic panels and a solar water heater on the roof by the end of spring. Presumably it’s a sign of the administration’s commitment to a green energy future, though it also goes to show just how slow Washington can be when it comes to implementing green initiatives

Dept. of the Interior