A Potentially New Worm Species In The Atlantic Ocean

This animal, which lives more than a mile and a half below the ocean’s surface, is one of three potentially... 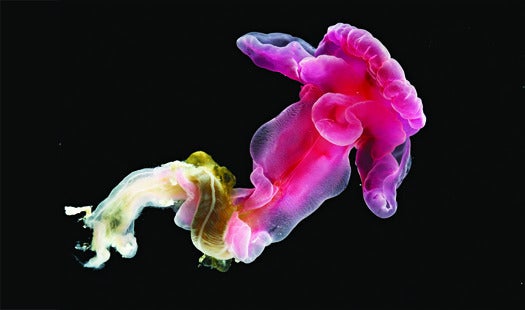 This animal, which lives more than a mile and a half below the ocean’s surface, is one of three potentially novel species of acorn worms discovered on a deep-sea expedition in June. Expedition participant Monty Priede and his team from Oceanlab at the University of Aberdeen in Scotland are currently analyzing the creature’s DNA while another member of the expedition,
Nicholas Holland, a marine biologist at the Scripps Institution of Oceanography in San Diego, compares specimens with two species of acorn worm already described.

The newfound critters, which Priede describes as “very fragile,” are around five inches long when their bellies are full but shrink to about two inches after they evacuate their guts. Very little is yet known of these worms’ life cycles. To date, only about 5 percent of the world’s ocean habitats have been explored.