It’s a 21st-century conundrum: You want a power-assisted bike that’s electrically powered and that packs an energy density (and a... 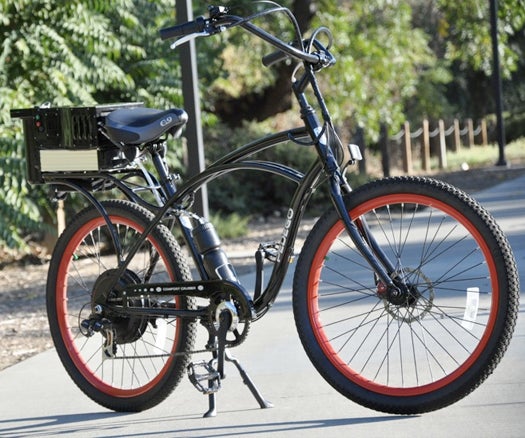 It’s a 21st-century conundrum: You want a power-assisted bike that’s electrically powered and that packs an energy density (and a light weight) that lithium-ion batteries simply can’t provide. But the idea of strapping a tank of compressed hydrogen between your legs makes you somewhat uncomfortable as well. SiGNa Chemistry has a solution: a metallic metal powder of sodium silicide that generates hydrogen as soon as it comes in contact with water.

The company claims the sodium silicide is a safe and stable powder, and when it generates hydrogen it does so at a pressure less than that inside a soda can. Pump a cartridge of the stuff full of water – it doesn’t have to be drinking water, you can reportedly even use urine in a pinch – and the powder generates hydrogen to fuel the power assist on your bike, leaving behind only eco-safe sodium silicate and water vapor. The spent cartridge can be swapped for a fresh one; no need to wait around for a recharge.

Next to lithium-ion batteries, the SiGNa cartridges are far more dense, packing 1,000 watt-hours per kilogram versus just 65 watt-hours per kilogram for Li-ion. That means a 1.5-pound fuel cell system should be able to power an average bike for up to 60 miles without any pedaling. Pre-orders for the cells are being accepted by SiGNa now, but you probably won’t see them installed on a bike until next summer.