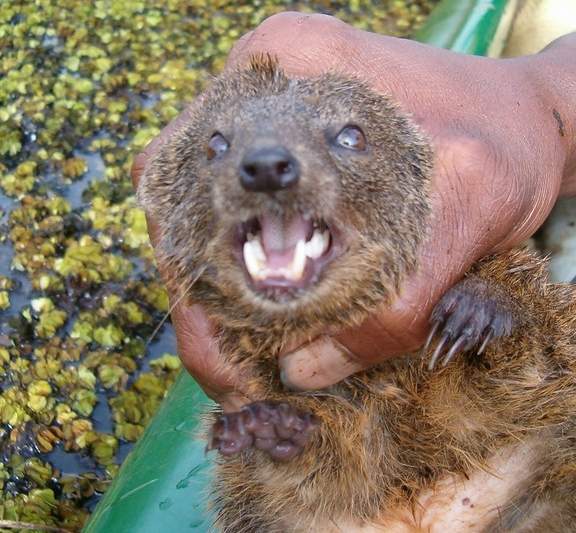 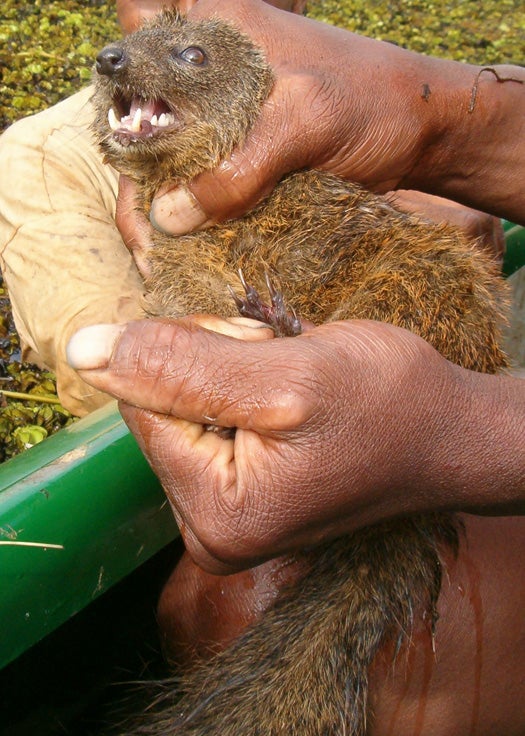 The first new carnivorous mammal to be discovered for 24 years. It was discovered on the Island of Madagascar by a team from Durrell Wildlife Conservation Trust (DWCT), the Natural History Museum, London, Nature Heritage, and Conservation International (CI).

Meet the Durrell’s vontsira (Salanoia durrelli). It ain’t pretty, but this small, mongoose-like critter—pronounced “voontseera”—has the distinction of being the first carnivorous mammal discovered in 24 years. The last was the related Grandidier’s vontsira, which, like the new creature, was found on Madagascar.

Researchers from the Durrell Wildlife Conservation Trust first spotted the one-pound animal swimming in the marshes of the Lac Alaotra wetlands of central eastern Madagascar in 2004 during a field survey of bamboo lemurs. The research, co-authored by scientists from Durrell; the Natural History Museum, London; Nature Heritage; and Conservation International, appears in the latest issue of the taxonomic journal Systematics and Biodiversity.

The Durrell’s vontsira’s closest relative is the rainforest-dwelling brown-tailed vontsira (Salanoia concolor). The two are members of a small group of animals known as Malagasy carnivores—meat-eaters found only on Madagascar. The newly discovered species probably preys on crabs and crayfish in the marsh, but may also eat smaller mammals, like rats. “Its teeth are bigger and more robust than those of brown-tailed vontsiras, so it’s likely that it is tackling stuff that’s more difficult to chew up,” says Frank Hawkins, vice president of the Africa and Madagascar program at Conservation International. Such differences in the Durrell’s vontsira’s teeth, skull and paws helped taxonomists at the museum confirm that it is a distinct species from its cousin, from which it may have diverged in the past 10,000 years.

“The vast majority of new mammals that have been described in the last 10 years have come from Madagascar,” Hawkins says. “Many of these species are hidden within populations of others. They look the same, but they have different calls, behavior and DNA,” he says. The discovery of the Durrell’s vontsira, however, was even more unexpected, as it’s the only Malagasy carnivore that lives in freshwater marshes rather than forests.

Unfortunately—and you knew this was coming—the outlook for the Durrell’s vontsira isn’t great. Agricultural expansion, burning and invasive plants and fish are threatening the Lac Alaotra marshes. Add to that the creature’s tiny population size (Hawkins estimates that only a few dozen individuals may exist today) and severely restricted habitat of less than a square mile, and you may be looking at the most endangered carnivore on the planet.