India’s Ministry of Environment and Forests just approved the building of the Indian Neutrino Observatory (INO) in the Bodi West... 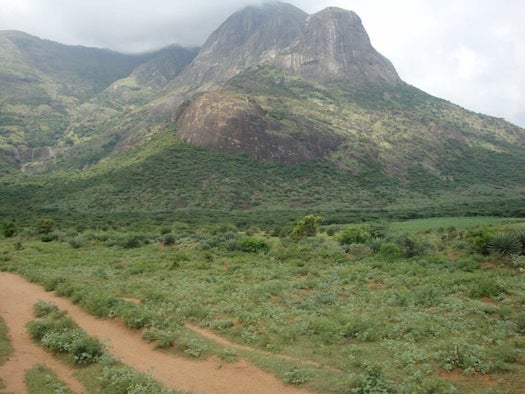 India’s Ministry of Environment and Forests just approved the building of the Indian Neutrino Observatory (INO) in the Bodi West Hills, located in Tamil Nadu. The INO is a ridiculously ambitious project that dwarfs CERN, requiring 50,000 tons of magnetized iron to study neutrinos.

Neutrinos are the elusive miniscule particles that are able to travel at tremendous speeds and pass through ordinary matter undetected, which of course makes it hard as hell to detect them. Scientists have previously built giant machines to attempt to study them, and proposed such goofy ideas as using the moon as a tester. But the INO might be the most impressive of all.

First discussed in 1989, the INO was shuffled around due to a lack of resources (including a lack of trained physicists) and opposition from environmental groups (the original site was next to a tiger preserve). But a new program to train physicists was set up, the site was moved to southeastern India, and now the plans have secured approval from the Ministry of Environment and Forests.

The INO will use that huge amount of iron, layered in sheets, as the passive material, with about 30,000 neutrino detectors — glass resistive plate chambers — sandwiched in between the sheets. The lab hopes to measure, study, and examine neutrinos beamed from CERN or Fermilab (distance and mass in between the labs not really being an issue for neutrinos). Their main goal is to study the tendency of neutrinos to oscillate between their three forms–electron, muon, and tau–which is, at this point, mostly theoretical. There are some proposals that involve communication via neutrino but study is needed to figure out exactly what these things are and how they work.