If NASA ever gets a clear directive for interplanetary exploration, a new Hundred-Year Starship could be their version of the... 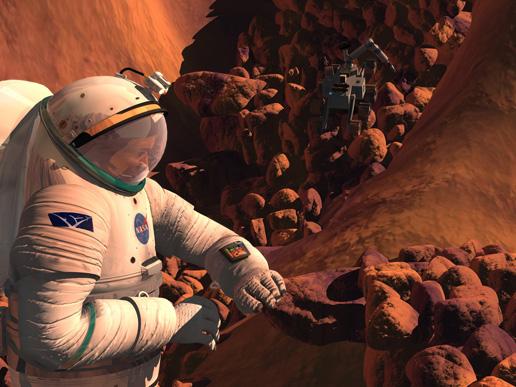 If NASA ever gets a clear directive for interplanetary exploration, a new Hundred-Year Starship could be their version of the Mayflower. And like the first pilgrims, Martian explorers might set sail with the knowledge they would never return home.

NASA and DARPA have joined forces to build something called a Hundred-Year Starship, according to the director of NASA’s Ames Research Center. Simon “Pete” Worden said NASA contributed $100,000 to the project and DARPA kicked in $1 million.

“The human space program is now really aimed at settling other worlds,” Worden said, according to a Singularity University blog that covered the event. “Twenty years ago you had to whisper that in dark bars and get fired.” (Worden added that he was fired by President George W. Bush.)

Beyond that, there are no details. But the prospect of a DARPA-NASA spaceship collaboration for Star Trek-esque exploration sounds thrilling — even if by definition, a 100-year ship means leaving Earth and never coming back.

Incidentally, that’s exactly the proposal in a new paper in press in the Journal of Cosmology, a relatively new, peer-reviewed open access journal. Dirk Schulze-Makuch and Paul Davies suggest sending astronauts to Mars with the intention of staying for the rest of their lives, as trailblazers for a permanent Mars colony.

They would get periodic supply missions, but they would be expected to fend for themselves for water, shelter, nutrients and mineral/chemical processing. They would be expected to develop some kind of homegrown Martian industry, which could ultimately serve as a hub for an expanded colonization program. Plus, leaving some people on another planet would probably ensure that we’d want to go back, to visit them and see what they created.

Such a mission would save money, the authors say, because the prohibitive costs (in dollars and payload) of a manned Mars mission are mostly associated with bringing the astronauts home.

“Eliminating the need for returning early colonists would cut the costs several fold and at the same time ensure a continuous commitment to the exploration of Mars and space in general,” they write.

In a news release, Davies, a cosmologist at Arizona State University’s Beyond Center, compared would-be Mars colonists to swashbuckling explorers like Columbus and Amundsen.

“It would really be little different from the first white settlers of the North American continent, who left Europe with little expectation of return,” he said.

Still, getting there would require an advanced propulsion system that could get off the ground with minimal fuel and land safely. At the weekend event, a Long Now Foundation-funded conference in San Francisco, Worden also said NASA is also exploring electric propulsion systems.

He believes we should go to the moons of Mars first, and believes it can happen by 2030.

“(Google cofounder) Larry Page asked me a couple weeks ago how much it would cost to send people one way to Mars and I told him $10 billion, and his response was, ‘Can you get it down to 1 or 2 billion?’ So now we’re starting to get a little argument over the price,” Worden said.

Of course, that price tag does not include the inestimable cost of saying goodbye forever. NASA has worked with several psychologists and psychiatrists to study future astronauts’ response to isolation and long-term absence from loved ones — but a permanent absence is even more complicated.

Schulze-Makuch, a Washington State University associate professor, said he would do it — but only after his kids are grown.