How It Works: How Physicists Use Strontium To Slice A Second Into Thinner Slivers

The most precise measurement of time ever made 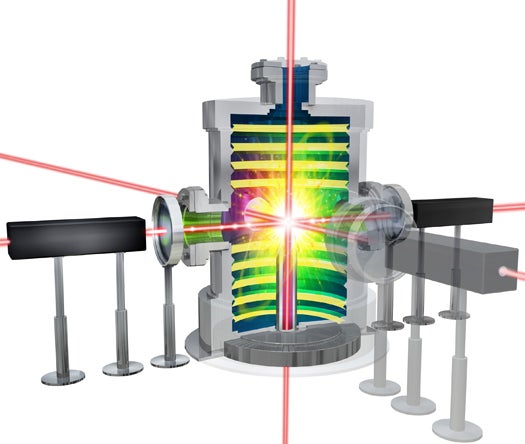 For most of history, people have divided the Earth’s motion around the sun into finer and finer units in pursuit of more accurate timekeeping. In 1967, humanity officially adopted a new method: counting atomic oscillations. Specifically, this means measuring the frequency of the photons absorbed or emitted by an atom’s electrons as those electrons gain or lose energy. These photons oscillate as reliably as Earth orbits the sun, but at much higher frequencies than once a year.

The current international standard for defining a second is based on the measurements of some 250 atomic clocks calibrated to the cesium atom, which oscillates at slightly more than nine billion times a second. That sounds pretty precise, but physicists at JILA and the National Institutes of Standards and Technology, both in Boulder, Colorado, want to do even better. One idea is to replace cesium atoms with strontium atoms, which oscillate 430 trillion times a second. Here’s how physicists cool and trap the strontium atoms and how they count the “ticks” of those atoms’ electrons.

20 attoseconds–one of those ridiculously precise standards we’re celebrating this week–is the lag time between two electrons successively breaking loose from a neon atom. A team of physicists timed the phenomenon in June. An attosecond is one billionth of one billionth of a second.

1: Cold. Physicists send strontium atoms into a vacuum chamber and fire two different lasers at them in succession. The lasers gather the atoms into a group, herding them like sheepdogs. This restricts the atoms’ physical motion, cooling them to just a few millionths of a degree above absolute zero.

2: Confinement. After cooling the atoms, physicists must prevent them from running into each other, which can change the atoms’ oscillation frequency and thus limit the accuracy of the clock. To do so, the scientists organize some 2,000 of the atoms into groups of about 30 using a lattice of light from a third laser.

4: Measurement. Scientists determine the laser’s frequency using a device called an optical-frequency comb, which combines a spectrum of known frequencies with the clock laser, to create a third, easily measured signal. The clock laser’s frequency during optimal operation is about 430 trillion cycles per second, meaning that the strontium clock “ticks” 430 trillion times a second.