Four ounces of shampoo is enough to send the Transportation Security Administration into a tizzy, but the U.S. government does... 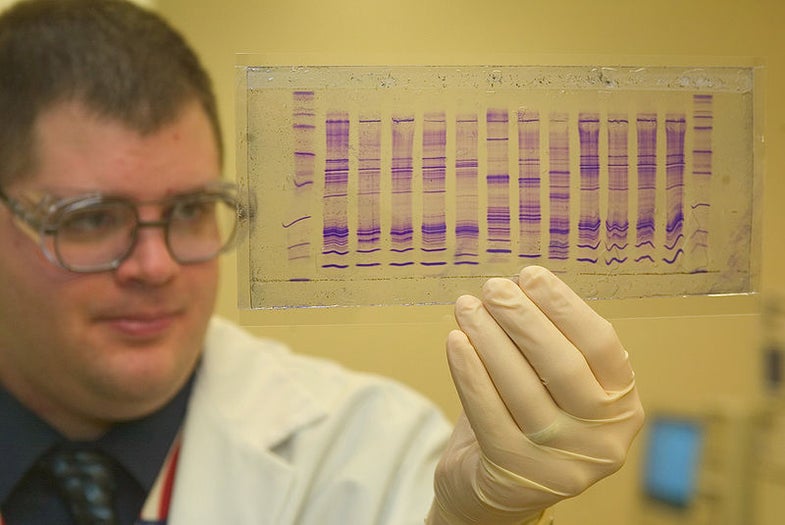 Four ounces of shampoo is enough to send the Transportation Security Administration into a tizzy, but the U.S. government does not have any rules governing the making of custom sequences of DNA to order, for sale to any interested would-be bioterrorists. Until now, anyway.

Earlier this month, the federal government announced guidelines for companies that sell “custom DNA,” which could conceivably be used to build deadly viruses from scratch, reports New Scientist. The rules would apply to any companies that sell DNA sequences made to order; apparently, there are at least a dozen. The government wants these companies to go all TSA and verify customers’ identities, checking them against a no-buy list.

The Department of Health and Human Services explains that the new guidelines will minimize the risk of bioterrorists using nucleic acid synthesis technologies to cause harm. The agency also aims to minimize the impact on research and business operations, according to its website. But a quick glance at the denial list suggests genetic researchers of Chinese or Middle Eastern heritage might have some issues.

The federal government also wants companies to check orders for genetic sequences that are unique to specific viruses or toxins on a list of potentially dangerous “special agents.” For instance, if you order a sequence that looks a lot like the genetic code of Yersinia pestis, which causes plague, Uncle Sam might get suspicious.

When these rules were being crafted, scientists cried foul, noting that synthetic DNA is a powerful tool for exploring ways to fight disease. They added that genetically speaking, some microbes might look a lot like items on the list of “special agents,” and red tape could block otherwise important research.

As of now, the U.S. government and some other countries already restrict who is allowed to work with certain germs, but not who can work with those germs’ genetic codes, New Scientist explains.

The White House Office of Science and Technology Policy and the National Security Council worked with HHS and representatives from industry and academia to craft the new rules.