Thanks to a joint investigation from academics and the Department of Homeland Security, the culprit in the Case of the Honeybee Killer has been found. 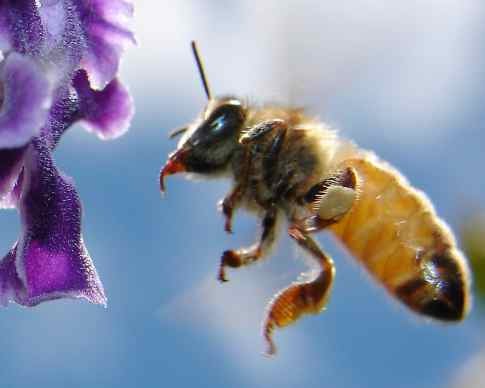 Over the last four years, 20 to 40 percent of the honeybee colonies in the U.S. have mysteriously collapsed. The killer has remained unknown–until now. A team of entomologists, along with military scientists from the Department of Homeland Security, have a new prime suspect (or rather, suspects), as shown in a new report on the science website PLoS One. A tag-team of a virus and a fungus show every sign of being the culprit. Now it’s just a matter of eradicating that dastardly partnership.

Entomologists from the University of Montana have teamed up with military scientists from the Department of Homeland Security–an unexpected liaison, for sure–began following the clues of the mass deaths of the honeybees. The honeybee die-off is peculiar, and the circumstances of the illness that collapses colonies makes it particularly difficult to analyze. Before the bees die, they fly away from the hive in all directions, which hampers efforts to collect large numbers of bees for analysis.

But the military proved to have the tools the academics did not, a protein research software that is designed to test and identify biological agents in the field. (The New York Times elaborates on the somewhat grotesque way the bees are analyzed–they must be turned into a paste, and it turns out that coffee grinders are the best tool for that unsavory task.)

The culprit seems to be an unholy combination of a fungus and a virus–to be precise, Nosema ceranae and an invertebrate iridescent virus. The fungus, N. ceranae, had already been identified, but the particular virus had not been connected. It turns out that the virus and fungus working in concert is just about 100% fatal, whereas either alone is not necessarily so.

Of course, just identifying the culprit is only the first step. The entomologists still have to find a way to stop the tag-team attack. It looks as though they’ll focus on the fungus, which is easier to block and defeat than the virus, and which, if defeated, should be enough assistance to help get honeybee populations back on track. And there’s always more to uncover–the tendency of the bees to wander off just prior to death is still a mystery (a University of Montana doctor actually uses the phrase “insect insanity” as a possible explanation), but that should all come in time.

[PLoS One via New York Times]