First graphene, now this: Carbon is just the hottest element on the block these days. The 2010 Nobel Prize for... 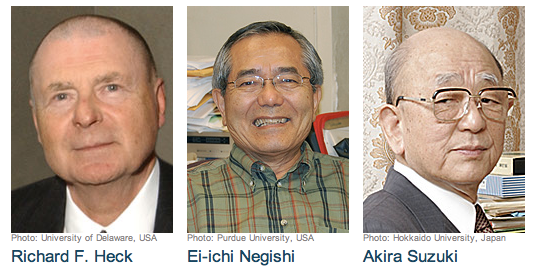 First graphene, now this: Carbon is just the hottest element on the block these days. The 2010 Nobel Prize for Chemistry has just been awarded to three chemists who have come up with a technique that allows them to build carbon-based molecules as complex as those found in nature.

Richard Heck (of the University of Delaware), El-ichi Negishi (of Purdue University) and Akira Suzuki (of Hokkaido University in Japan) all developed a process known as palladium-catalyzed cross coupling. This technique allows for incredibly complex synthetic carbon-carbon bonded molecules without all the by-products created by older methods.

The technique has some pretty amazing implications for both medicine and technology. Discodermolide, a molecule copied from a Caribbean sea sponge’s poison, would have been impossible to create in such large quantities without this cross-coupling–and discodermolide shows some pretty fantastic potential as a cancer-fighting drug. Certain parts of consumer tech products like OLED screens (used in some smartphones) also rely on the technique. Even the Nobel Prize for Physics used it in its exploration of graphene.

The three chemists worked independently, but their discoveries played off and built on the work of all three, so they are being awarded the Nobel prize jointly for their efforts in the field. Congrats to all three honorees!