Stewart discovers the secrets of planets by re-creating their collisions 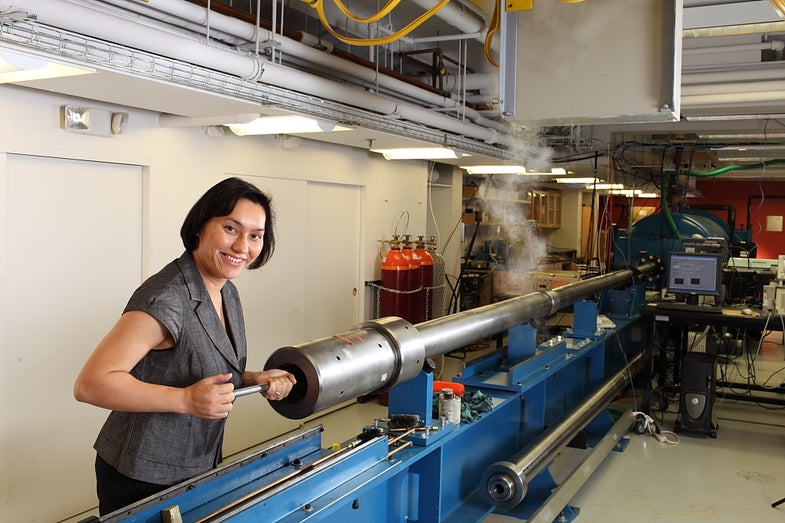 Why does the universe look the way it does? Sarah T. Stewart thinks she knows the answer. “It all comes down to big things running into each other,” she says. Space is a collection of battered rocks, and Stewart studies their scars and shapes. A planet’s pockmarks can be used to predict its age—if it has many, it’s probably been around for a while—and its dimensions can hint at what might lie beneath the ground. “I use the way craters look,” she explains, “to learn about the planet they’re on.”

Stewart credits Orson Scott Card novels like Ender’s Game for her early interest in space, because they highlighted “the crazy things that could exist out there.” She doesn’t just study existing phenomena, though; she also makes them. In the basement of the Harvard Earth and Planetary Sciences building, using a 20-foot- long gun, Stewart creates the collisions that may have shaped the solar system 10 billion years ago. She first uses computer models to form hypotheses, then replicates uses smaller pieces of rock or ice in her lab to see if she’s right.

It’s not just a matter of bashing things together. She and her graduate students spend weeks preparing for each one-millisecond-long blast, building their target and mount mirrors around it, hooking up temperature, optical and radiation monitors, and making a custom vacuum chamber to ensure that the gun fires at 6,000 miles per hour. And once they’ve pulled the trigger, they must rebuild everything—everything—because the equipment gets blown away. “Our experiments are a little time-consuming and expensive,” she admits.

She loves to pulverize ice because it was involved in so many formative Milky Way collisions. Last year, she used it to solve a mystery: The Voyager 1 probe discovered craters on Jupiter’s satellites that inexplicably resembled craters within craters. Scientists knew the surface was covered in ice but couldn’t explain the formations. Stewart perfectly reproduced the bizarre craters, and she determined that the surface ice immediately outside the impact formed, for a split second, two alien kinds of ice. Stewart essentially observed another world without leaving her lab.

Now Stewart is turning her attention to large Earth- like planets called super-Earths that exist outside our solar system. Scientists don’t know why some colliding rocks merge to form these planets while others do not. “We want to understand how to make them,” she says. Sometimes, the best way to learn about something is to create—or destroy—it yourself. As she points out, “it’s sort of like playing God.”