With his ability to analyze individual cells over time, he’s learning which ones make for good drugs, which cause allergies, and which cure disease 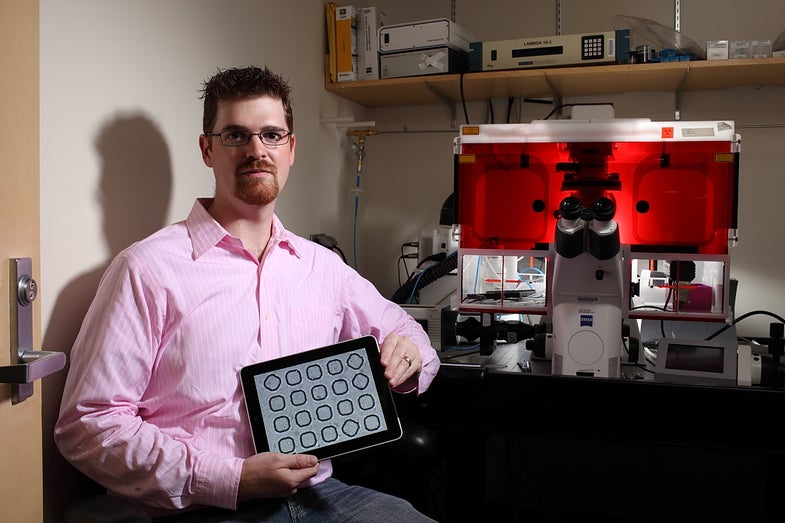 Need to conduct multiple experiments on a single cell over time? Too bad. At the cellular level, we just have a wide-angle view, because the tools currently available to biologists show only whole cell populations at once. But much like people, individual cells behave differently, and each one can change the fate of many others. So Christopher Love, as a chemist-turned-immunologist, has developed a technique to zero in on an individual cell. His goal, he says, is to “take a picture of it, ask who it is.” Spotting a cell’s unique quirks over time could solve long-standing medical mysteries: how the immune system responds to HIV infection, what methods doctors should use to diagnose deadly allergies, and why drug production is so inconsistent, and thus so expensive.

For decades, biologists who wanted to know what proteins a single cell was producing got just one shot, because the standard tests kill the cell. Love’s method can track a cell’s secretions over time. He takes the equivalent of an ice-cube tray and fills each well with one or two living immune cells. Over the course of an hour, he blots the cells with a material that captures the chemicals they have released. Repeated over time, the process can identify the secretions and how they change.

Using his imprinting technique, Love discovered that immunologists evaluating an HIV treatment’s effectiveness on individual patients were often looking at the wrong indicators, and he is now helping to develop a better test. He also found a new method of analyzing the telltale markers that immune cells release in the presence of a food allergen. This could lead to better allergy tests, which are otherwise inaccurate about a quarter of the time.

But Love’s work isn’t focused solely on humans. In March he uncovered a curious property of yeast. Many pharmaceutical companies use it to produce protein-based drugs like growth factors and antibodies. Although the populations of yeast they use are genetically identical, the cells don’t behave like it; Love found that while certain yeast cells secrete large amounts of a desired compound, others make nothing at all. He is now seeking to understand what causes these discrepancies in the hopes of improving yield, which could bring down the price of some drugs significantly. As he has shown, the world is a nuanced place, and every individual—whether immune cell or yeast—has something to say.