Now that scientists are done making a map of the cosmic microwave background, they can use that detailed map to... 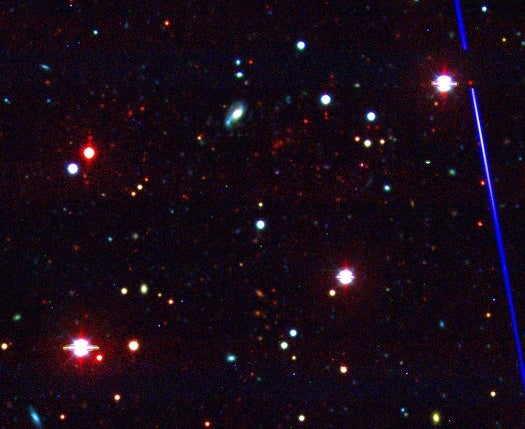 Now that scientists are done making a map of the cosmic microwave background, they can use that detailed map to find hidden treasures from the ancient universe.

The huge cluster remained hidden until SPT scientists spotted it by looking for distortions in the cosmic microwave background, the afterglow of the Big Bang. These distortions are created as background radiation passes through a large galaxy cluster, according to the Harvard-Smithsonian Center for Astrophysics.

The cluster, which is found in the southern constellation Pictor the painter, is full of galaxies that formed when the universe was only about two billion years old. They are quite faint and their light is shifted toward the red end of the spectrum, meaning they are very far away; according to the Harvard-Smithsonian center, the cluster’s redshift value puts it roughly 7 billion light-years from Earth.

This means we see the cluster as it appeared 7 billion years ago. If we could see it now, it would probably be about four times this size.

Old, humongous galaxy clusters like this can be used to study how dark matter and dark energy drove the evolution of the cosmos. Gravity holds the clusters and associated inter-galactic gases together, and dark energy drives them apart.

When the universe was less diffuse, gravity had a stronger influence; in a 2009 study, scientists said gravity should have led galaxy clusters to increased 50-fold over 5.5 billion years. But dark energy stunted the spread of these behemoths, and they only grew 10-fold.

Galaxy clusters can help astrophysicists measure dark energy’s equation of state — the magic number that explains cosmic inflation and the accelerating expansion of the universe. The CMB search method provides an accurate cluster mass, which is important for these studies.

A paper on the new cluster, designated SPT-CL J0546-5345, appears in the Astrophysical Journal.