Imagine if every time you needed to officially identify yourself you had to be sedated and knocked out cold. This... 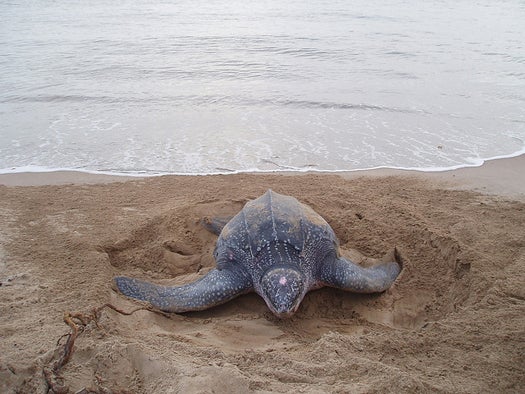 Imagine if every time you needed to officially identify yourself you had to be sedated and knocked out cold. This might sound only slightly less stressful than checking through security at the airport, but for animals being tracked by wildlife authorities and researchers it’s a regularity that is not only stressful, but potentially harmful. But new “visual fingerprinting” technology that recognizes individual animals based on physical characteristics – similar to face recognition technology – is allowing researchers to track animals from afar, sans the tranquilizer darts and physical ID tags.

One beneficiary of this emerging technology is the leatherback sea turtle, which marine biologists usually identify by conventional plastic tags. These tags often fall off, leaving behind scars but no way to identify specific specimens. So conservation group Widecast approached a Dutch computing firm about developing an algorithm that can identify turtles by unique, pigment-free spots on top of their heads, encoding those distinct patches into a biomarker.

Using a biomarker database, the Widecast team is able to identify turtles not just in person, but from digital photographs taken of the turtles’ heads. This opens up a whole new kind of crowdsourced science, in which anyone who happens across a sea turtle can snap a photo of its head with a smartphone or camera and upload it to a database along with geo-location data and other relevant info. The system can identify the turtle, building a profile for each specimen and its activities for researchers and wildlife authorities to draw upon.

Non-invasive, digital biomarking schemes are being developed for other animal species. African penguins can be digitally identified by the unique markings on their chests, while black rhinos (for whom sedatives can cause fertility problems in females) can be identified in absentia from their footprints alone. Similar footprint-recognition software has been used to create biometric signatures for white rhinos, polar bears, and cheetahs as well.

Such biomarker databases, made ubiquitous, could change the way biologists conduct their research as everyone from farmers to photographers to hikers and outdoors enthusiasts could contribute – easily and in real time – to both specific studies and to the larger cannon of wildlife study. As for the animals themselves, a quick vanity shot from a digi-cam sure beats a shot of heavy sedatives.