Batteries are the bane of all portable electronics. Bigger, heavier batteries make devices less portable, while smaller batteries lead to... 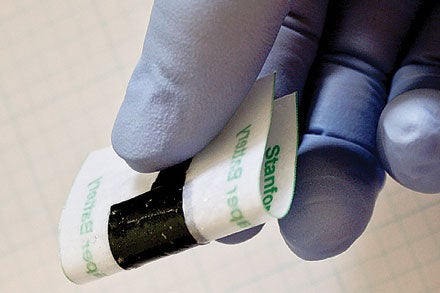 Batteries are the bane of all portable electronics. Bigger, heavier batteries make devices less portable, while smaller batteries lead to low performance or short battery life – or both. But while Stanford’s new lithium-ion batteries don’t necessarily cut down on footprint, they certainly cut down on mass; the new ultra-thin, rechargeable battery has been fabricated on a single sheet of paper, making it super-light, flexible, and as portable as a piece of A4.

The batteries were fabricated by materials scientists at Stanford by depositing a thin film of carbon nanotubes followed by another thin film of metal-containing lithium compound on top of the nanotube layer. These thin bilayer films are layered onto both sides of a piece of ordinary paper, which serves as both the structural support of the battery as well as the electrode separator. The lithium serves as electrodes, while the nanotube layers are current collectors.

The result is a working battery just 300 micrometers thick – that’s 300 millionths of a meter – that is flexible, super-thin, and more energy dense than other thin-bodied batteries. It’s also durable; over a 300-cycle recharge test, performance remained satisfactory. It’s also fairly easy to fabricate, making it far more commercially viable than other methods of downsizing battery technology.

Such batteries aren’t ideal for every application, but they could be extremely useful in future incarnations of smart packaging, RFID sensing, and electronic paper products.