How’s this for spooky action at a distance? The sun, at 93 million miles away, appears to be influencing the... 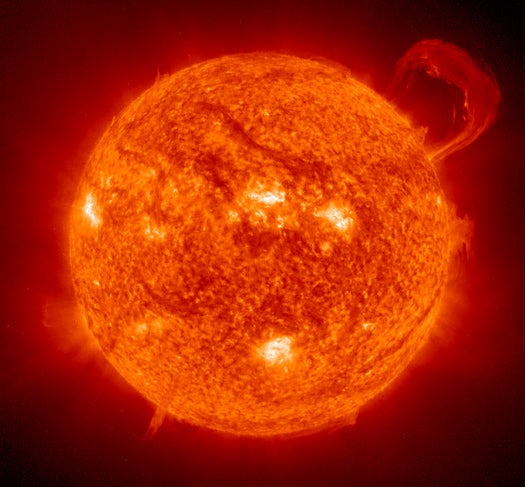 How’s this for spooky action at a distance? The sun, at 93 million miles away, appears to be influencing the decay of radioactive elements inside the Earth, researchers say.

Given what we know about radioactivity and solar neutrinos, this should not happen. It’s so bizarre that a couple scientists at Stanford and Purdue universities believe there’s a chance that a previously unknown solar particle is behind it all.

The big news, according to Stanford’s news service, is that the core of the sun — where nuclear reactions produce neutrinos — spins more slowly than the surface. This phenomenon might explain changing rates of radioactive decay scientists observed at two separate labs. But it does not explain why the decay-change happens. That violates the laws of physics as we know them.

While examining data on radioactive isotopes, Purdue researchers found disagreement in measured decay rates, which goes against the long-accepted belief that these rates are constant. While searching for an explanation, the scientists came across other research that noted seasonal variation in these decay rates. Apparently radioactivity is stronger in winter than in summer.

A 2006 solar flare suggested the sun was involved somehow. Purdue University nuclear engineer Jere Jenkins noticed the decay rate of a medical isotope dropped during the solar flare, and what’s more, the decline started before the flare did. The latter finding could be useful for protecting satellites and astronauts — if there is a correlation between decay rates and solar activity, changed decay rates could provide early warning of an impending solar storm.

But while that’s good news for astronauts, it’s bad news for physics.

Peter Sturrock, Stanford emeritus professor of applied physics and an expert on the inner workings of the sun, told the researchers to look for evidence that the changes in radioactive decay vary with the rotation of the sun. The answer was yes, suggesting that neutrinos are responsible.

But how could the nebulous neutrino, which does not interact with normal matter, be affecting decay rates? No one knows. It might be a previously unknown particle instead.

As Jenkins puts it, “What we’re suggesting is that something that doesn’t really interact with anything is changing something that can’t be changed.”