To think Marco Polo didn’t even know what he had. Silk and gold, considered luxury items for as long as... 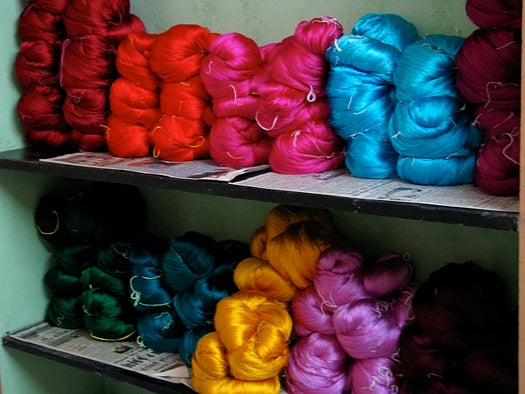 To think Marco Polo didn’t even know what he had. Silk and gold, considered luxury items for as long as mankind has enjoyed shiny things, might now lead the way forward in the growing field of metamaterials. Turning flashy into inconspicuous, scientists from Tufts and Boston University have created an invisibility cloak from silk coated with gold.

But keep your Harry Potter-like aspirations in check; this invisibility material only works in the terahertz range, a long wavelength region between radio and IR. The researchers think it could work at smaller wavelengths, including those in the visible spectrum, but that’s not even their focus right now. Far more promising are the implications in biomedicine, as silk is a biocompatible material.

Metamaterials are a unique category of materials that derive their optical properties from their physical makeup rather than their chemical makeup. That means they can be engineered to bend light in certain ways or to absorb or reflect all the light in a particular range. They’re not particularly easy to create and they are often rigid (unlike the Boy Wizard’s cloak), so the idea of metamaterials built on flexible substrates like silk is especially intriguing to materials scientists.

To make the metamaterial, the researchers took a one-centimeter-square piece of silkworm silk and stenciled 10,000 gold resonators onto that tiny surface. They then blasted it with terahertz waves, which usually would pass right through. Instead, the researchers detected a resonance. Taking it a step further, the team implanted the silk into a muscle and found that they could still detect a resonance when they bathed the muscle in T-waves.

While a terahertz metamaterial is nothing new, the fact that silk can be implanted into the body opens it up to far wider applications. For instance, an implanted glucose meter made of a silk metamaterial could monitor a diabetic’s blood sugar levels in real time – as glucose levels inside the body change the metamaterial would change too, beaming a text message to the person’s phone, no needle prick necessary.