In a patriotic dairy-to-diesel demonstration project proving the breadth of fatty materials that can be converted into useable fuels, a... 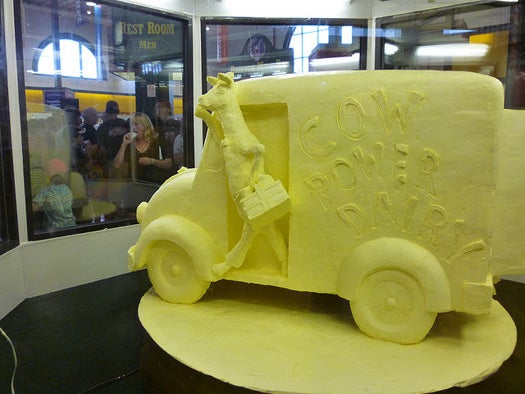 This is not the butter sculpture of Ben Franklin and the Liberty Bell. Matthew Beckler via Flickr
SHARE

In a patriotic dairy-to-diesel demonstration project proving the breadth of fatty materials that can be converted into useable fuels, a Philadelphia biodiesel producer and the U.S. Department of Agriculture have turned an 800-pound butter sculpture of Ben Franklin and the Liberty Bell into 75 gallons of biodiesel.

Every year, the Pennsylvania Farm Show in Harrisburg commissions a massive artwork made out of butter. And every year, that butter is wasted, or at least it was until 2007 when the show began asking for suggestions about what to do with 800 pounds of butter that is creeping toward rancid.

Dr. Michael J. Haas at the Department of Agriculture suggested they turn it into fuel, and biofuel maker BlackGold was brought aboard to handle the chemistry. Philly-based BlackGold has a process for turning a range of low-value fats and greases into biofuels – they recently put their technology into a first-of-its-kind plant in San Francisco that will turn pan scrapings and dirty restaurant greases into fuels – by shaving the glycerin from the fat molecules and replacing them with methanol molecules, creating diesel.

While 75 gallons of fuel from 800 pounds of once-edible (and somewhat costly) food isn’t necessarily a great bang for buck, the demonstration turned out exactly 75 more gallons of fuel than would’ve been produced if the butter had been trashed. The Ag. Department and BlackGold aren’t suggesting the U.S. start turning its vast butter resources into diesel, but simply that we turn more of our waste products into fuel (some of the agricultural waste that comes out of dairy farms might be a good place to start in this case).

Besides, they also answered that age-old scientific question: What the hell do we do with this 800-pound butter sculpture? Chalk up another victory for science.