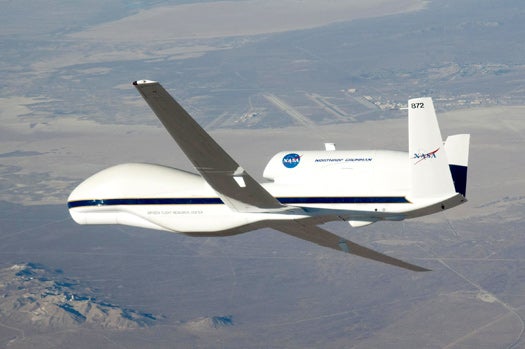 So far this hurricane season, the Atlantic has been quiet. That’s good news for Gulf oil spill cleanup efforts, but a team of NASA and NOAA scientists are hoping things will get just a little nastier.

This weekend, NASA is launching a six-week mission to study the formation and intensification of hurricanes, hoping to inform forecast models and improve hurricane prediction abilities. The GRIP experiment (for Genesis and Rapid Intensification Processes) involves more than a dozen satellite-quality scientific instruments onboard a Global Hawk unmanned drone, a converted WB-57 cold-war bomber and a modified DC-8.

Ramesh Kakar, the weather focus area leader for NASA’s science programs, says the goal is to improve understanding of the physical processes that generate hurricanes. He hopes forecasters will assimilate GRIP data into their prediction models, improving forecasts and providing earlier warning for communities in a burgeoning hurricane’s path.

So he’s hoping for some storms.

“Of course I do not want these to get to the land — just allow them to be spinning and then just move on,” he says. “But yes, I hope we do get enough cases, that Mother Nature allows us to see enough genesis cases so that we can say this was a successful mission.” The mission is timed to take advantage of the peak hurricane season, which generally starts in mid-August.

Scientists are increasingly skilled at predicting a hurricane’s path once it forms, but it’s very difficult to tell whether a tropical disturbance will grow into a named storm and if so, how big it will get, says Bill Gray, a renowned hurricane forecaster at Colorado State University who is not involved in the GRIP mission.

“It’s a problem of the physics. We don’t have good enough observations,” he says. “A hurricane is a very complex thing. It requires large-scale features to be of a certain characteristic, and to understand the small-scale — how the clouds evolve, the wind and condensation, see how these all interact with each other — it’s a complex thing. It’s not so easy to piece all this physics together.”

That’s the goal of GRIP, Kakar says. Instruments on the Global Hawk are designed to study hurricanes’ innards, using a microwave radiometer and radiosondes that rival the equipment used on NASA’s next-generation tropical weather satellites, one of which won’t launch until 2013. It contains instruments to measure wind, both horizontally and vertically; temperature and water droplet distribution inside clouds; pressure and humidity; and lightning.

The WB-57 airplane includes a new instrument that will take high-resolution radar measurements of the wind profile, from the ground to the aircraft’s height, around 60,000 feet. This will give scientists a good idea of the wind speed around the hurricane.

The information can be used to produce better models, according to Tim Miller, an atmospheric scientist at NASA’s Marshall Space Flight Center and principal investigator for the Hurricane Imaging Radiometer instrument.

“Even though we’re only measuring the ocean’s surface, computer models can take that information and use it to help develop a three-dimensional structure of the hurricane,” he says.

Gray says a detailed picture of how hurricanes form could help forecasters make better guesses, but every storm is different.

“They develop and intensify in different ways. Often you go measure one or two systems and think you understand it, but then you find next year, a system will form quite in a different way,” he says. “The storms are so variable in their structure and how they intensify and so on, that it is very hard to generalize.”

He and colleague Phil Klotzbach just updated their forecast for the remainder of the season, and they’re calling for 10 named storms. Gray says the ocean’s thermal heat capacity is high and sea-surface temperatures are increasing; what’s more, a La Nina effect, bringing cold water to the eastern equatorial Pacific, has taken hold.

Gray rings a bell on the Colorado State campus every year around Aug. 20, to herald the active part of the hurricane season.

“Given all those factors, we’ll eat a lot of crow and be very surprised if this is not a very active year,” he says.

But Kakar says even if the Atlantic remains quiet, GRIP will be a success.

“We will be looking at cases where there is potential for tropical storm formation, and it may not form. But that’s again a successful experiment, because the G of the GRIP is focused on what happens in the genesis — why some disturbances become tropical storms and some do not,” he says. So either way, we will learn.” 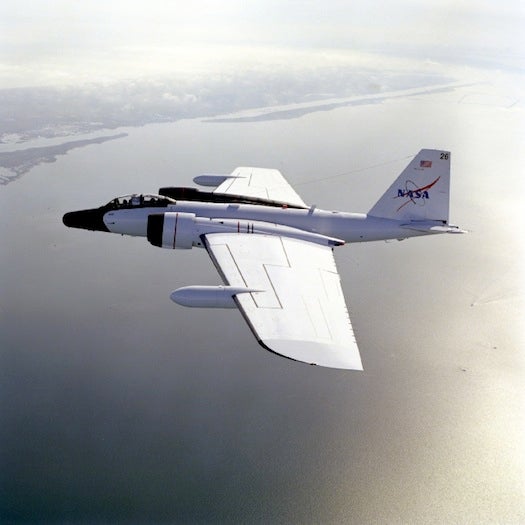 NASA’s WB-57 airborne laboratory will carry a suite of instruments to study hurricane formation, including a radar system that can measure precipitation. 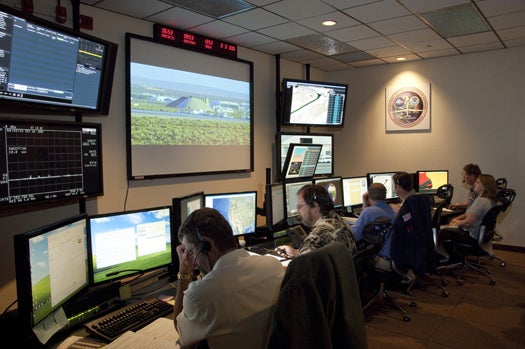 Pilots on the ground will control one of NASA’s Global Hawk drones as it flies above tropical storms. The drone can stay aloft for 30 hours, plenty of time to collect data as hurricanes evolve. 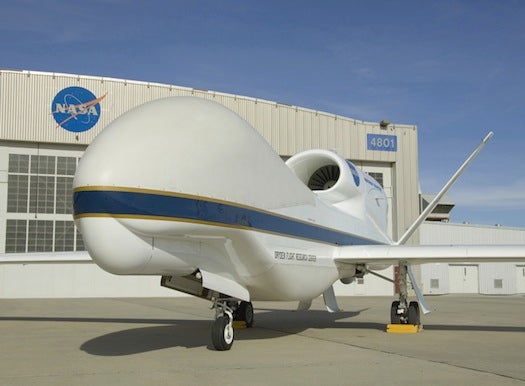 Ramesh Kakar, program manager for the GRIP experiment, says his team of engineers had to design their satellite-caliber instruments to fit inside the Global Hawk’s bulbous nose 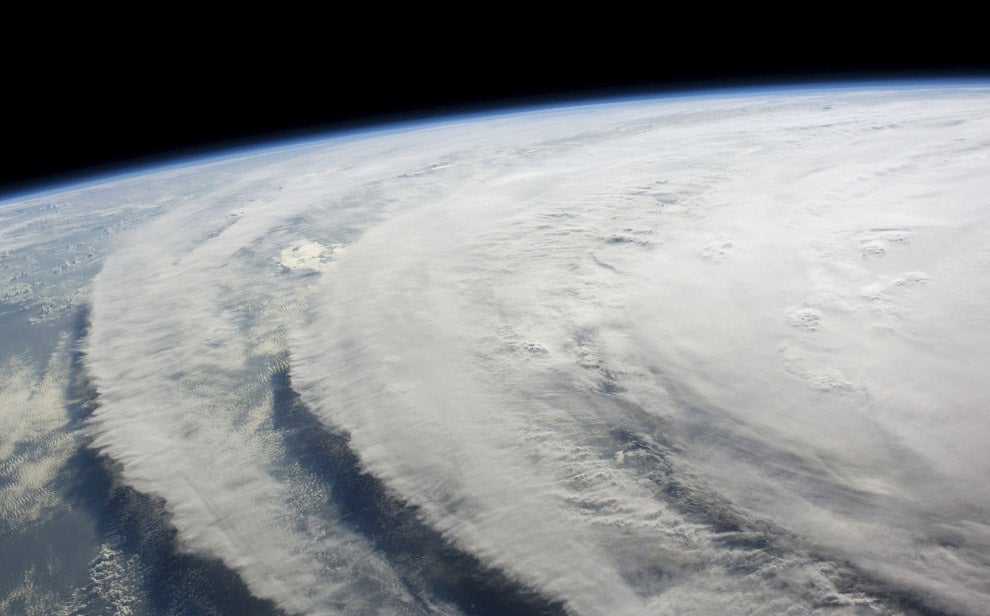 Hurricane Ike on September 10, 2008, taken by the crew of the International Space Station. NASA is embarking on a hurricane research mission this weekend that will help explain how these storms form and intensify. 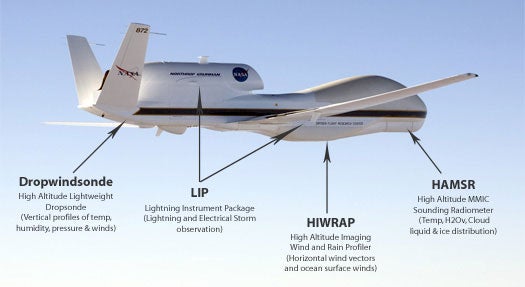 The instruments on the Global Hawk rival those found in NASA’s tropical weather satellites. The sounding radiometer can also work as a spectrometer.

The converted commercial airliner is equipped with an instrument that can measure a hurricane’s wind profile from ground to the aircraft’s height.

Instruments onboard the WB-57 include HIRAD, the Hurricane Imaging Radiometer, which will help determine the strength and structure of hurricanes by looking at wind speeds deep within the storm. 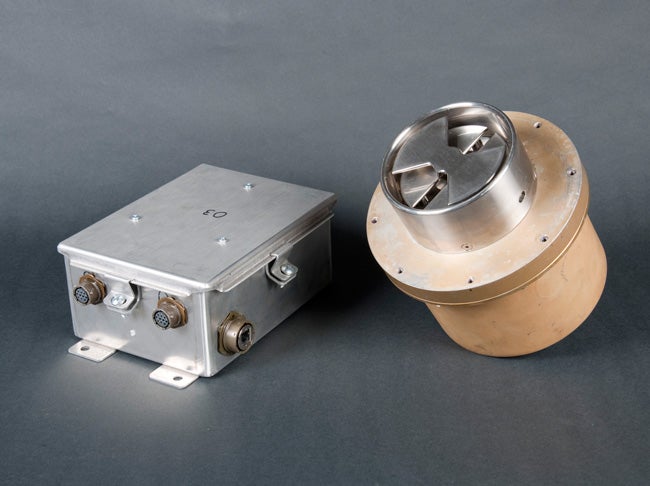 This small instrument package will observe electrical storms and how they evolve inside hurricanes. 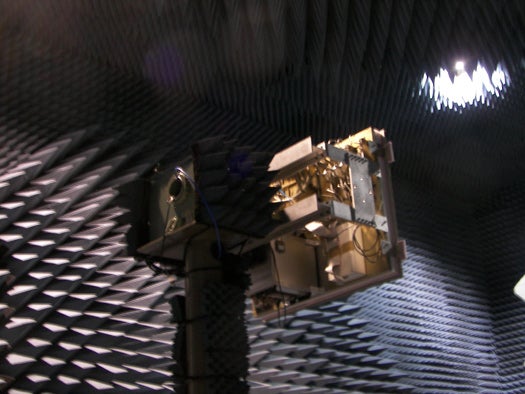 The Hurricane Imaging Radiometer can measure not only directly under the plane, but also out to each side, providing a two-dimensional picture of storm structure.
Environment
feature
global hawk
hurricanes
nasa