Human pluripotent stem cells – the kind that can become any kind of specialized cell and therefore be used to... 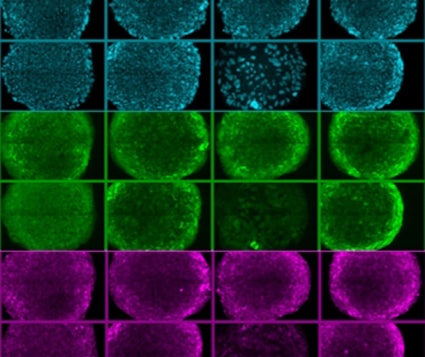 Human pluripotent stem cells – the kind that can become any kind of specialized cell and therefore be used to treat pretty much any kind of cellular damage – hold seemingly limitless promise if only we could manipulate them in useful quantities. Now, researchers at MIT have overcome a major obstacle to both stem cell study and eventual stem cell treatments by creating a synthetic surface that enables stem cells to live and multiply for months, producing clinically-useful quantities of identical cells.

Stem cells could be the key to treating all kinds of ailments ranging from deseases like Alzheimer’s or Parkinson’s to physical injuries like spinal traumas. But creating stem cells is a tricky business. In order to perform the necessary experiments to develop treatments, researchers need large batches of identical cells. Often, this means catalyzing growth using materials that include proteins or cells from mice. These materials drive stem-cell growth for lab-bound cells, but if they were actually integrated into a human body there would likely be an immune reaction.

This inability to create viable, human-ready stem cells in large quantities has dogged researchers in the field, but MIT researchers may have finally found a fix. Through a long process of trial and error, they deduced that certain material qualities in the media in which the cells are grown affect stem cell growth.

Hydrophobicity – the degree to which a material repels water – is one of those key characteristics, and by adjusting the composition of various synthetic materials to get the right hydrophobicity they were able to engineer a successful scaffolding on which to grow cells. By further adjusting the polymers used for other factors, like which embedded proteins seemed most conducive to cell growth, they were able to further increase their stem-cell output.

The team’s best material got both embryonic stem cells as well as induced pluripotent stem cells (mature cells reprogrammed to an immature state) to grow and reproduce for up to three months without adding any animal matter into the mix. That means not only have they found a way to create identical cells in quantities that are useful for developing treatments, but that the materials research could also be adopted for other kinds of cells as well.