Micro electromechanical systems–or MEMS–hold a lot of promise for the future of high tech, but they also have their drawbacks,... 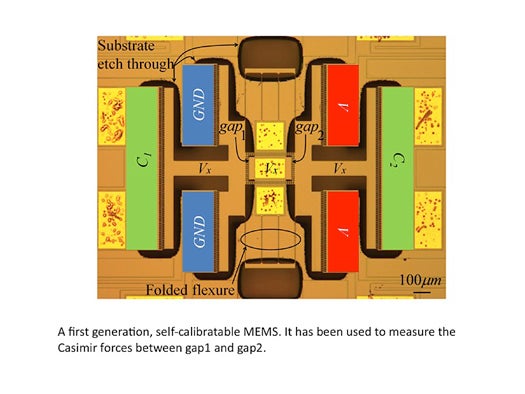 This image depicts a device that enables tiny micro-electromechanical systems to "self-calibrate," an advance that could make possible superaccurate sensors, a "nose-on-a-chip" for law enforcement and a new class of laboratory tools for specialists working in nanotechnology and biotechnology. (Jason Vaughn Clark, Purdue University Birck Nanotechnology Center).
SHARE

Micro electromechanical systems–or MEMS–hold a lot of promise for the future of high tech, but they also have their drawbacks, namely that they aren’t very precise. That’s because at such small scales there are no standards by which to measure very small forces or distances. But a team of Purdue researchers has developed a way for MEMS to self-calibrate, potentially opening the door to a variety of super-precise sensors and instruments used in everything from medicine to engineering to defense.

MEMS inherit their inaccuracy from their minuscule size and the way they are fabricated. At such small size – we’re talking sizes down to billionths of a meter – it’s not possible to ensure that MEMS are uniform. Since no two MEMS can be reliably manufactured to be exactly the same, there has to be some means of calibrating them to cancel out those incongruities. But it’s very difficult to measure distances, and especially forces, at those small levels as well, and thus far there has been no standard by which to calibrate two MEMS to function or measure exactly the same way.

The new technology, termed electro micro metrology (EMM), allows engineers to determine the force being applied to a MEMS device. EMM defines the mechanical properties of MEMS by measuring electronic properties, which are easier to measure than physical forces at that scale. By measuring a MEMS device’s capacitance, the storage of electrical charge, researchers are able to figure out the shape, stiffness, and force being exerted by or on the device with precision.