Franken-canola has been found growing along roadsides in North Dakota, in one of the first known cases of genetically modified... 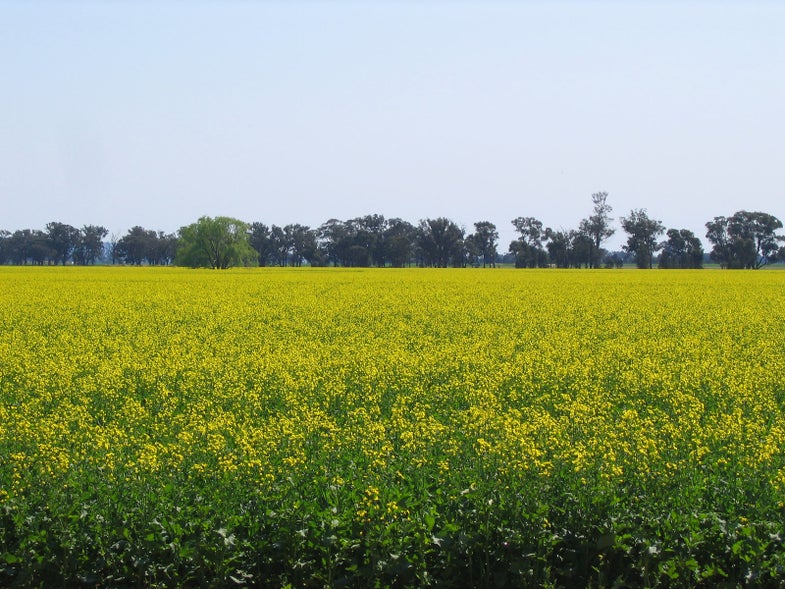 Franken-canola has been found growing along roadsides in North Dakota, in one of the first known cases of genetically modified crops taking hold in the wild. The finding shows that genetically modified canola plants can survive and thrive in the wild perhaps for decades, according to a study presented today at the annual meeting of the Ecological Society of America.

Meredith G. Schafer, a graduate student from the University of Arkansas, and colleagues traveled along 3,000 miles of interstate, state and county roads in North Dakota and stopped every five miles to take a sample of a canola plant. Of the 406 plants collected, 80 percent of them had at least one transgene.

And in at least two plants, the herbicide-resistant strains had cross-pollinated, resulting in canola resistant to both Roundup and LibertyLink (known chemically as glyphosate and glufosinate).

It’s not that surprising, because most canola plants grown in North Dakota have been genetically modified to resist herbicides, especially Roundup, made by Monsanto, and LibertyLink, made by Bayer. Genetically engineered seeds en route to farmers’ fields might blow off a truck and into roadside fields, where the plants take root. In some spots, the plants were as tightly packed as they would be on farms.

What was surprising was the plants’ prevalence, however — they were found along busy roadsides but also in the middle of nowhere, researcher Cindy Sagers told BBC News.

Genetically modified canola had already been found growing in the wild in Canada, and a canola relative was found in Japan, BBC reported.

St. Louis-based Monsanto said in a statement that the finding should neither be surprising nor alarming, however. Tom Nickson, the environmental policy leader at Monsanto, noted that canola is usually found near roadsides, because the seeds are small and easily carry on the wind.

“Because about 90 percent of the U.S. and Canadian canola crop is biotech, it is reasonable to expect a survey of roadside canola to show similar levels of biotech plants,” he said.