The successful use of an engineered chemzyme is a world first 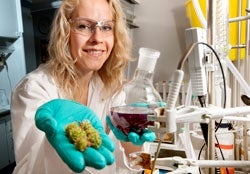 For the first time, a human-designed chemical enzyme — a chemzyme — has been used to break down a toxin found inside fruits and vegetables.

Chemzymes are designed to emulate the body’s naturally occuring enzymes, but are much simpler and tougher. A chemzyme designed by a Danish scientist successfully neutralized glycoside esculin, a toxic compound found in horse chestnuts. The toxin can cause nasty problems like muscle twitching, lack of coordination, vomiting, diarrhea, depression and paralysis.

Enzymes are made from strings of amino acids and are responsible for chemical reactions inside the body. They can quickly break down food and toxins, and can be used in other applications to spur chemical reactions. But they are very complex and fragile, and therefore hard to duplicate.

Chemzymes are stripped-down versions of natural enzymes, containing the minimum ingredients for them to work, according to researchers at the University of Copenhagen, where the chemzymes were developed.

Scientists have been working on synthetic enzymes for a variety of applications, including medicine and industry. But Jeannette Bjerre, who just received her Ph.D. at the University of Copenhagen, has shown for the first time that artificial enzymes can be designed to neutralize food-borne toxins.

The chemzyme’s simple design might make it easier to create new chemzymes for specific tasks. Researchers have already shown that simple changes in a chemzyme’s structure can dramatically alter its chemical-reaction abilities.

So far, no one has been able to make chemzymes that work as quickly as their natural counterparts. But chemzymes are more resistant to heat and chemicals, so they would be easier to produce in large quantities, which could open new doors for pharmaceutical and chemical research.