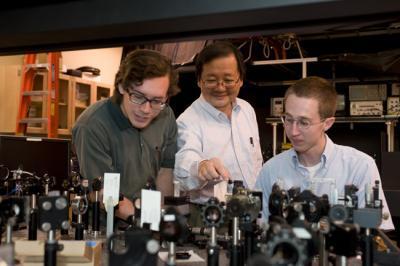 With lackluster battery tech one of the biggest hurdles standing between existing energy economies and those of the green, renewable future, there’s a lot of pressure on researchers to come up with the next big battery breakthrough. And pressure, it turns out, might be just the ticket. By exerting the kinds of super-high pressures found deep within the Earth on a unique compound, researchers at Washington State University’s Pullman campus have created a novel new material with the capacity to store huge amounts of mechanical energy as potential chemical power.

Calling the material “the most condensed form of energy storage outside of nuclear energy,” the researchers created the super-battery inside a diamond anvil cell, a small chamber that can create extremely high pressures within a confined space. The team filled the chamber with xenon difluoride, a white solid usually used to etch silicon conductors.

The science is in the squeezing; under normal atmospheric conditions, the molecules of xenon difluoride keep a respectable distance from one another. But under the intense pressures produced by the diamond anvils the molecules are forced together into metallic 3-D structures. At one million atmospheres — roughly equivalent to the pressure found halfway to the center of the Earth — the xenon difluoride is pressed neatly into these structures where the mechanical energy of all that pressure is stored in the chemical bonds between the molecules.

And just like that, the material becomes a chemical battery containing the mechanical energy from all that pressure. That raises the possibility of practical applications such as high-energy fuels, high-powered and compact batteries, or semiconductors that can function at very high temperatures.