Using Microsoft’s WorldWide Telescope program, you can now take an interactive tour of Mars with the highest-resolution images available of... 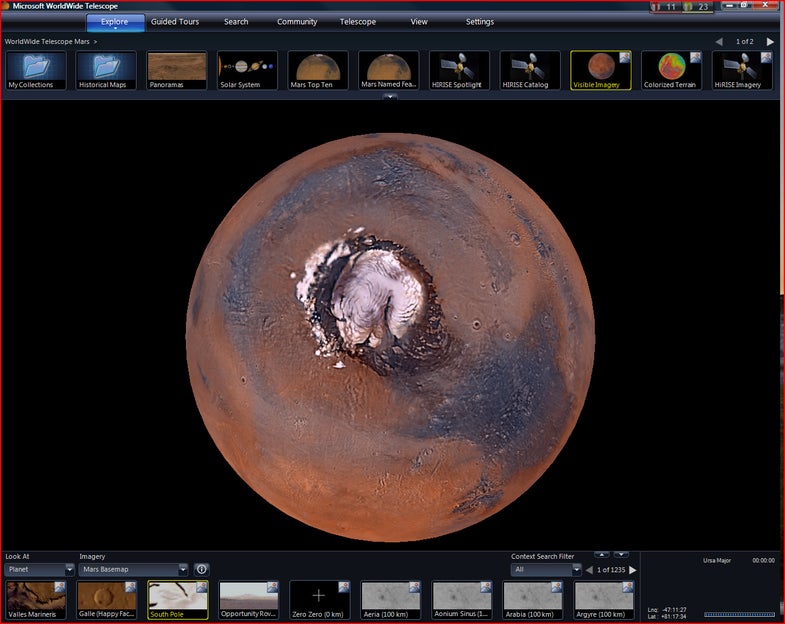 Using Microsoft’s WorldWide Telescope program, you can now take an interactive tour of Mars with the highest-resolution images available of the Red Planet — something even scientists have never been able to see before.

NASA scientists have been crunching data for three years on more than 100 computers to come up with the brand-new Mars map. Its image collection spans the Viking orbiters nearly 40 years ago to the HiRISE camera on the Mars Reconnaissance Orbiter, which is still snapping pictures.

NASA says it was looking for a way to share its wealth of Mars images, and WorldWide Telescope was a good fit. To use it, you have to download the PC-only free program, or use a Web client.

NASA says the map may lead to new scientific discoveries.

The program lets you fly through a 3-D rendering of Victoria Crater, soar past Olympus Mons and examine rock formations with surface-level detail.

In some Martian locales, you can right-click an image, and you’ll find Web pages for the missions that captured them.

The 3-D effect is derived from information provided by an instrument called MOLA, the Mars Orbiter Laser Altimeter, which flew on the Mars Global Surveyor. Scientists at NASA’s Ames Research Center at Moffett Field, Calif., combined the data with regular images to come up with 3-D views.

The images themselves reside on the Nebula cloud at NASA-Ames.