Taking cues from slime molds, ants, and living biological cells, a team of University of Pittsburgh researchers has designed a... 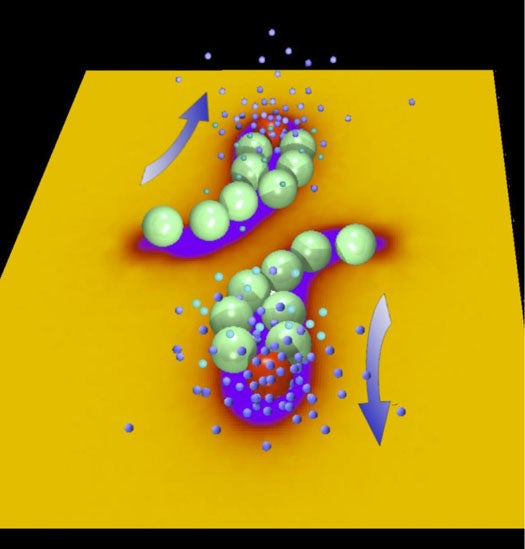 Taking cues from slime molds, ants, and living biological cells, a team of University of Pittsburgh researchers has designed a system of artificial cells that can communicate with one another and cooperate to carry out tasks. The computer models they’ve devised could lead to artificial cellular systems that perform highly specialized jobs at the microscopic level.

The artificial cells are more like microcapsules that can move independently and deposit cargo wherever it’s needed. But directing these microcapsules — or more accurately, getting them to direct themselves — is the real breakthrough.

This cycle locks the two into a cycle that can be thought of as a conversation. Engineers can manipulate that conversation by adjusting the nanoparticles themselves, the capsules’ permeability, and the number of nanoparticles each one is given.

But how do the microcapsules know where to find each other? That’s the neatest trick of all: the Pitt engineers devised a method — with a tip of the hat to ants — wherein the capsules leave a chemical trail behind them as they move about. That trail prompts other microcapsules to follow, just as ants follow one another along a perfect trail even though the trail isn’t marked. Such an ability to gather, follow, and cooperate could make for highly targeted drug delivery systems or carry out super-precise chemical processes in the lab.