Competition with the Large Hadron Collider heats up 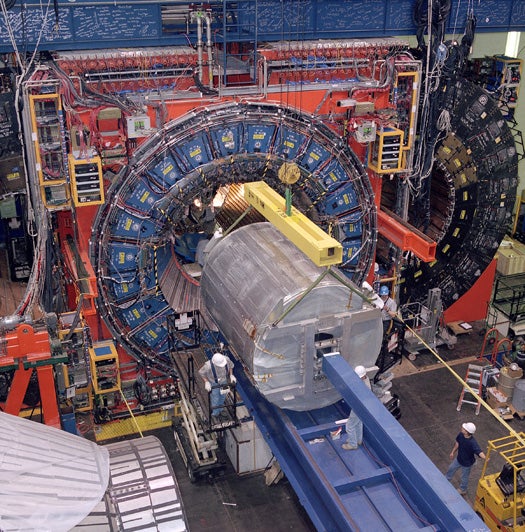 An interesting blog post from University of Padua physicist Tommaso Dorigo is churning up the rumor mill this morning, and it’s so tantalizing we can’t help but engage in a little rumormongering ourselves. So without any evidence or proof, we’re just going to dive right into the meat of the matter: there’s talk that researchers at the Tevatron Accelerator have discovered the Higgs Boson, beating the Large Hadron Collider to the punch and possibly confirming the standard model of particle physics.

But though Fermi National Accelerator Laboratory — home to Tevatron — hasn’t said anything about the findings or the rumors, there is some reason to believe that perhaps the elusive Higgs has indeed shown itself. Fermi has said it is making progress toward the Higgs, giving itself a 50-50 chance of finding it this year and claiming it should have enough data to make a definitive statement on the Higgs’ existence by early 2011 regardless.

As for Dorigo, he claims on his blog that “it reached my ear, from two different, possibly independent sources, that an experiment at the Tevatron is about to release some evidence of a light Higgs boson signal. Some say a three-sigma effect, others do not make explicit claims but talk of a unexpected result.”

Nebulous, we know, but when it comes to the smallest of the small in particle physics there’s not a whole lot that’s concrete anyhow. So why the silence from Fermi? First of all, as a respected scientific institution there’s little incentive for it to jump the gun and fuel the rumor cycle before it’s got the hard data written up and ready to publish. But New Scientists speculates the lab might be waiting to present at the International Conference on High Energy Physics in Paris in a few weeks.

Stay tuned, as we’ll be following this one closely.