Plastiki, the Boat Constructed from Plastic Bottles, Sails into Sydney After Pacific Crossing 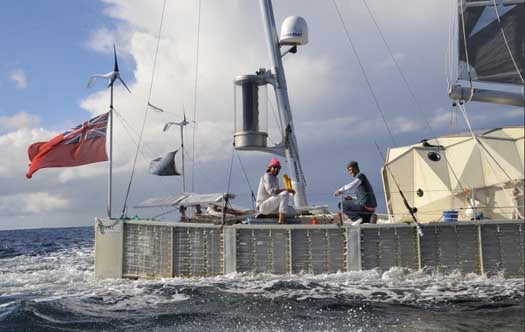 Four months and 9,000 miles after setting sail from San Francisco, Plastiki – the boat fashioned from 12,500 plastic bottles – has moored safely in Sydney Harbor, bringing the environmental awareness campaign to a successful climax.

Plastiki was created to bring greater attention to the Great Pacific Garbage Patch, a mass of waste estimated to be the size of Texas that has collected just below the water’s surface between California and Hawaii.

Much of that waste is plastic, which is having detrimental effects on ocean ecosystems in the vicinity. Plastiki sailed from California to Australia via the Garbage Patch to underscore the growing problem there.

The team also punctuated that point by noting on its Web site that in the U.S. alone nearly 8.7 billion plastic bottles had been used and disposed of since the voyage began – enough to build nearly 700,000 Plastikis.

Plastiki is a catamaran, buoyed by the thousands of plastic bottles that make up its pontoons. Other parts of the boat are made from various recycled materials. Plastic bottles and repurposed materials might sound less-than-seaworthy, but the vessel held up to some pretty serious stress testing: At one point during the approach to Australia a storm pounded the vessel with 70-mile-per-hour winds and 30-foot swells.

Plastiki will remain docked at the Australian National Maritime Museum in Sydney for a month.