It took mankind centuries to map the Earth, and even with all of the indexed knowledge in the world behind... 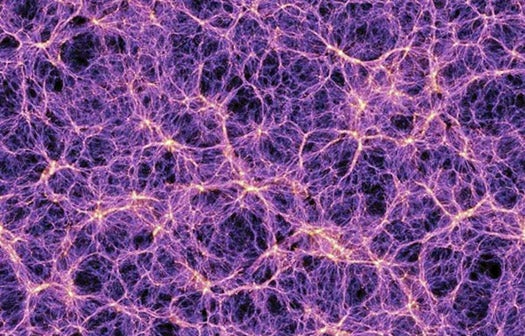 It took mankind centuries to map the Earth, and even with all of the indexed knowledge in the world behind it Google can’t always figure out exactly where the nearest Pinkberry is. So one might imagine how even with the amazing leaps in technology over past decades, mapping the universe is no small undertaking. But a new technique could allow cosmic cartographers to map 500 times as much of the universal landscape as they have thus far at a fraction of the cost.

We don’t know a whole lot about dark matter, outside of the fact that gravity suggests that it’s there. But we do know that galaxies exist in a sort of dark matter web that runs throughout the universe. Using luminous galaxies as waypoints, astronomers have been able to map this cosmic web to some extent, but galaxies more than 5 billion light-years away are too dim to survey. Since we know that the leftovers of the Big Bang have left us with a far-off waypoint that we’ve determined to be about 45 billion miles away, we can be sure that we haven’t mapped the vast majority of the observable universe because we simply can’t see it.

Instead of looking for the light emitted from individual universes, the new technique looks for red-shifted radio waves emitted from hydrogen atoms clustered in gas clouds within galaxies. These red-shifted waves are distinctively red-shifted 21 centimeters, indicating the presence of hydrogen and hence a galaxy. The technique can detect galaxies far beyond that 5-billion-light-year boundary, plotting the locations of galaxies as far as 12-billion-light-years out.

A radio telescope optimized for the task could do even better, and researchers are presently developing plans for just such an instrument. What’s more, it should cost about $20 million. In terms of space telescopes, that’s dirt-cheap. With it, they think they will be able to map as much as half of the observable universe faster and more cheaply than galaxy surveys can.

Now all we need is a vehicle that allows us to put these intergalactic maps to good use.