Magnetic Nanoparticles Can Be Used to Charge Neurons And Control Your Behavior, Study Says

Researchers in Buffalo are bringing us a step closer to being controlled by machines. Or magnetized nanoparticles, at least: Heated... 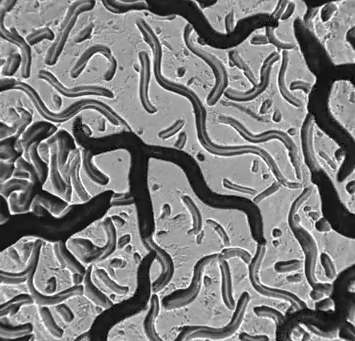 Researchers in Buffalo are bringing us a step closer to being controlled by machines. Or magnetized nanoparticles, at least: Heated magnetic nanoparticles targeted to cell membranes could control your behavior, according to a new paper in Nature Nanotechnology.

The researchers, led by University of Buffalo physics professor Arnd Pralle, used magnetic fields to activate neurons in a cell culture and steer the movement of nematode worms.

The findings could lead to cancer treatments that remotely manipulate cells in certain tissues, or diabetes therapies that remotely stimulate pancreatic cells to release insulin, according to the University of Buffalo.

The system works by exposing 6-nanometer-sized particles in a cell membrane to a magnetic field, which heats them up. The field is comparable in strength to the kind used in magnetic resonance imaging. When the temperature reaches 34 degrees Celsius (93.2 F), the cells react — that’s the temperature that provokes a natural avoidance response, the researchers say.

In this video, the nematodes (C. elegans) are wriggling around; they change direction when the magnetic field is switched on, warming the nanoparticles to 34 C.

The method does not harm the cells, Pralle says. While the membrane outside the cell heats up, there is no temperature change inside. Pralle and his team even devised a nano-thermometer to measure this effect. They used a fluorescent probe, and changes in the fluorescence intensity indicated the change in temperature.

Because the cells are not harmed, the method can be used in living animals, which opens the door for specialized pharmaceuticals or therapies. It can also illuminate the signaling networks that control animal behavior, Pralle says.