But oil is still part of the mix 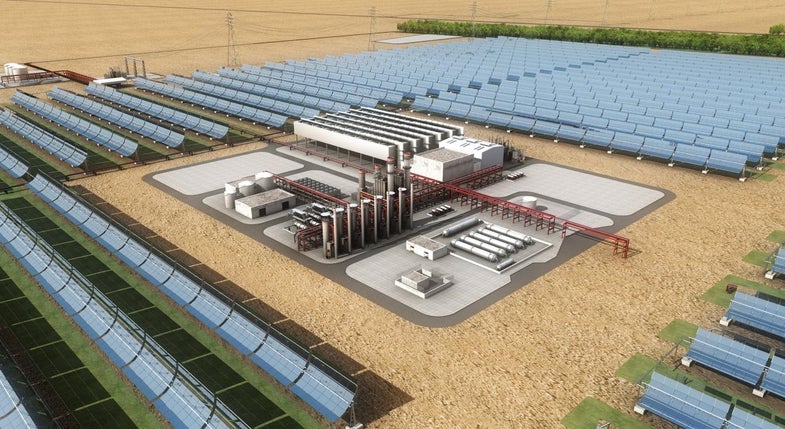 The Shams 1 concentrated-solar power plant will be the world's largest, and the first of its kind in the Middle East. Construction is set to begin in Abu Dhabi later this year. ME Newswire
SHARE

One of the world’s hottest, sunniest spots will soon be home to the world’s largest concentrated solar power plant, helping an oil-rich emirate achieve its renewable energy goals.

Though the plant will produce 100 MW of electricity, it won’t exactly wean Abu Dhabi off its bread and butter. It’s a special kind of solar plant that uses oil along with the power of the sun.

Shams 1 will produce 100 megawatts and cover one square mile of the desert in Madinat Zayed, about 75 miles southwest of Abu Dhabi. But it’s not your typical solar plant. Concentrated solar power plants use mirrors to heat liquid — in Shams’ case, a type of oil — to then heat water, running a steam generator that produces electricity.

It’s better than burning the oil, however. Masdar pointed out that the plant will offset 170,000 tons of carbon dioxide emissions annually, the equivalent of planting 1.5 million trees or removing 150,000 cars from Abu Dhabi roads. Abu Dhabi aims to obtain 7 percent of its electricity from renewable sources by 2020.

Santiago Seage, CEO of the Spanish firm Abengoa Solar, says concentrated solar’s main advantage is that it is less intermittent. You have a solar field … but you also have a boiler where you use natural gas to create the steam if the solar resource is not enough,” he told AFP.

Which raises the question, if the sun is considered too intermittent a resource in a scorching spot the Arabian Peninsula, will it ever be consistent enough for the United States?

While Abengoa Solar has built four other concentrated-solar plants in Spain (and is building one in the US) Shams 1 is the first such plant to be registered under the United Nations’ Clean Development Mechanism, which makes it eligible for carbon credits.

It’s also the first commercial-scale solar project in the United Arab Emirates, according to Masdar. Within the next few years, Shams 1 will be followed by Shams 2 and 3.