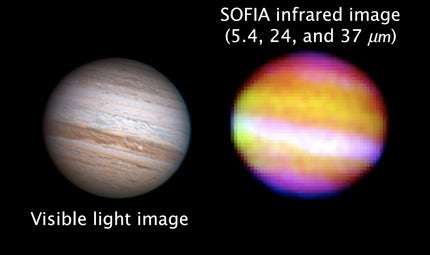 Infrared images of Jupiter and the galaxy M82 are the first pictures from NASA’s flying telescope, which took to the skies late last week.

The Stratospheric Observatory for Infrared Astronomy, or SOFIA, is a modified Boeing 747 jet with a hole in its side to make room for a diameter reflecting telescope 100 inches in diameter. The May 26 flight lasted six hours and reached 35,000 feet.

A composite image of Jupiter shows the planet’s heat, trapped since the its formation, pouring out of Jupiter through holes in its clouds. (The image at left is a usual visual-wavelength picture for comparison.)

The “Faint Object infraRed Camera for the Sofia Telescope,” or Forcast instrument, took only minutes to capture that image. It would have taken hours to do so with ground-based telescopes, because water vapor in the atmosphere blocks their view.

Sofia flies above 99 percent of the obstructing water vapor, which allows it to receive about 80 percent of the infrared light visible to the orbiting observatories. It’s actually more powerful than the Hubble and Spitzer space telescopes, because it can see light ranging from ultraviolet to the far infrared.

NASA officials celebrated the flight, saying it marked the beginning of a 20-year mission of astronomical science and discovery. NASA’s previous flying telescope, the Kuiper, lasted about that long and discovered the rings of Uranus, among other accomplishments.

Sofia will study the compounds present in planet-forming disks around young stars, among other missions.

Scientists from NASA and its partner, the German Space Agency, will jointly operate the 17-ton telescope from inside the plane’s cabin. The jet will fly about 500 miles per hour between 41,000 and 45,000 feet, and the autopilot and telescope computers will communicate with one another so astronomers can track a single object throughout the flight. 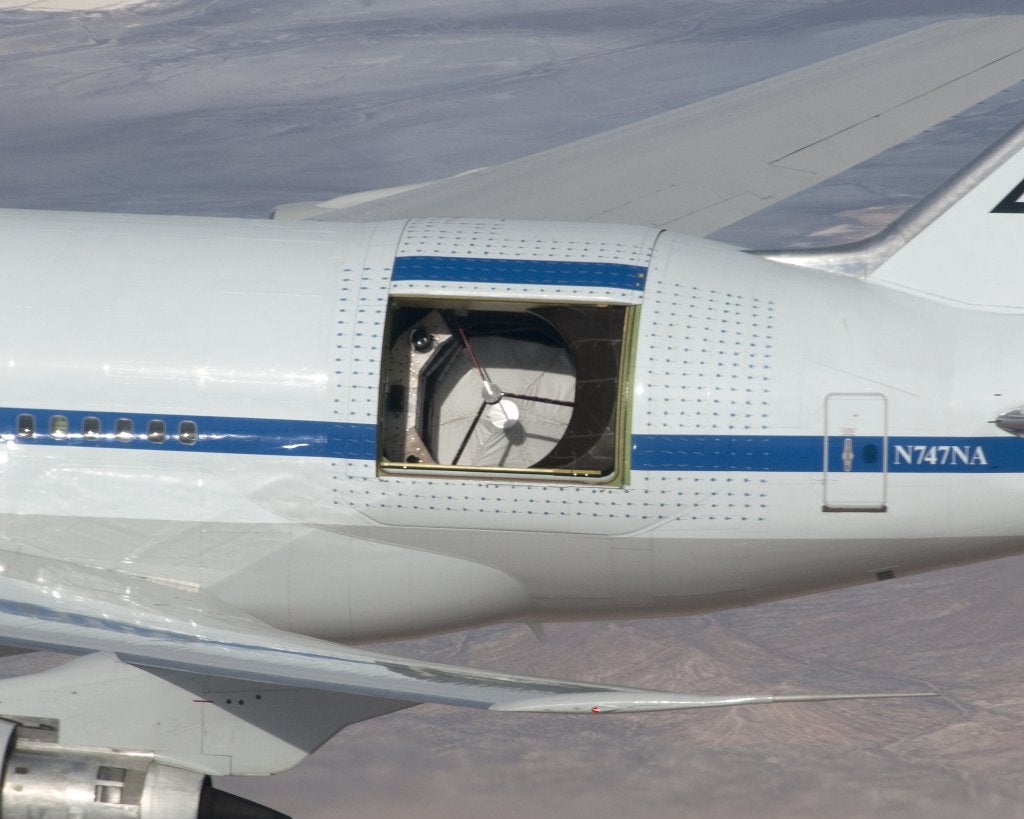