There’s been a lot of rather vague back and forth regarding the magnitude of the Gulf oil leak — it’s... 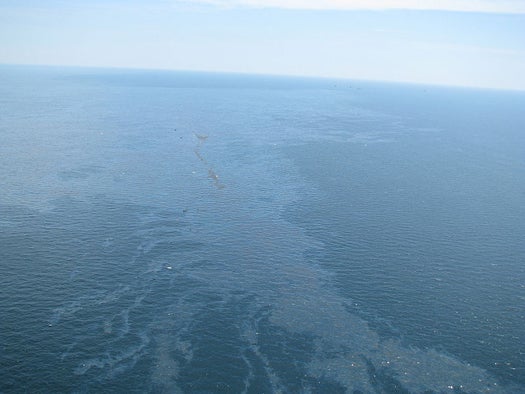 There’s been a lot of rather vague back and forth regarding the magnitude of the Gulf oil leak — it’s worse than the Exxon Valdez, but not as bad as 1979’s Ixtoc I leak, but worse than the Pittsburgh Pirates, etc. etc. Now researchers have qualified the spill in terms that don’t leave a lot of room for semantic quibbling, confirming the existence of huge concentrations of oil spreading for miles beneath the surface of the Gulf – the “plumes” previously denied by BP and federal officials – and calling the disaster unprecedented in “human history.” Moreover, for the first time federal officials are backing up that assertion.

“It’s an infusion of oil and gas unlike anything else that has ever been seen anywhere, certainly in human history.” So says the leader of a group or researchers aboard the F.G. Walton Smith, who spoke with reporters yesterday after spending two weeks touring the Gulf while studying an underwater plume of oil measuring 3 miles long, 15 miles wide, and about 500 feet thick, the core of which is 3,500 to 4,000 feet below the surface. Meanwhile, NOAA researchers have confirmed the finding of undersea oil concentrations up to 40 nautical miles northeast from the leak site.

The good news from 4,000 feet down is that bacteria are breaking down the oil, feasting on the bounty of hydrocarbons loose in the water. The bad news is that the feeding frenzy is causing oxygen levels to dive and could create a “dead zone” in which marine life will be smothered.

Then there’s the methane, which is rising to levels up to 10,000 times higher than normal, and the oil dispersants, whose effects on marine life and food chains are largely unknown.

The takeaway from all this: Regardless of how many barrels or gallons of oil have slipped into the water versus previous disasters, researchers in the Gulf are concerned that the Deepwater Horizon spill may be the worst ecological disaster in known marine history due to the size and density of the plumes in the Gulf as well as what can fairly be described as a botched response to the disaster (are surface dispersants necessary when the source of the oil is so deep?).

While crises like these tend to draw out all kinds of agenda-driven opinions, the federal government and many of the smartest minds therein are now coming to terms with what’s going on down South, formally backing these less-than-optimistic opinions of scientists working in the Gulf. That bodes well for the spirit of consensus, but not for the long-term ecological health of the Gulf Shore.