In an effort to restore Andean glaciers to their former color, a Peruvian inventor is breaking out the paint at... 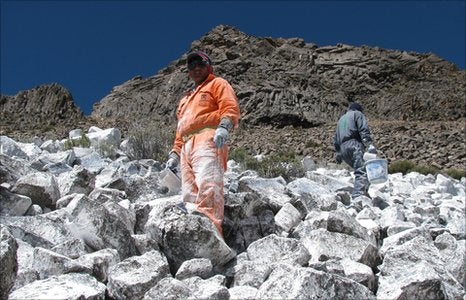 In an effort to restore Andean glaciers to their former color, a Peruvian inventor is breaking out the paint at 15,000 feet.

Eduardo Gold — who is not a scientist — is working with a small crew of Peruvian villagers to mix egg whites, lime and water to make an environmentally friendly whitewash, once again giving the Andes a snowcapped look.

Gold and a team of painters wearing protective suits are clambering over rocks near the now-extinct Chalon Sombrero glacier, which used to irrigate a valley and feed several rivers in the Andean region of Ayacucho in southern Peru. They don’t have paintbrushes, so the workers are using jugs to slosh the mixture — a recipe used since colonial times — onto the rocks.

Gold’s idea had enough merit to win him a $200,000 prize from the World Bank as part of its “100 Ideas to Save the Planet” competition. Gold is waiting for the money to arrive, but he’s already started work. He aims to cover three peaks and 173 acres, creating a micro-cooled climate that could conceivably slow the melting of glaciers in the Andes.

Melting glaciers are problematic not only because of the impact on water systems and alpine ecology, but because their white surfaces help the planet stay cool by reflecting sunlight.

This is known as albedo, and it’s one of the biggest challenges in climate change study — the warmer the planet gets, the more ice melts, meaning less sunlight is reflected, meaning things get warmer, and so on. Energy Secretary Stephen Chu has suggested painting rooftops white to increase albedo in certain regions.

Gold says he has studied glaciology and hopes his efforts will spur glaciers to return to the region. He says a cooling effect might spur the growth of small glaciers, which could make the air cooler, encouraging more glaciation, and so on.

Some scientists and politicians have dismissed this idea, however — Peru’s Environment Minister, Antonio Brack, called the project “nonsense.” But one glaciologist says it might have a small impact, according to AFP. It could help lower temperatures by a fraction of a degree up to a couple degrees, according to Thomas Condom, a glaciologist and hydrologist working at the French Institute for Research and Development of Lima.

Gold maintains that it’s worth a try.

“I’d rather try and fail to find a solution than start working out how we are going to survive without the glaciers, as if the situation was irreversible,” he told AFP.