New Procedure Sifts Winners From Losers in a Sample of Sperm 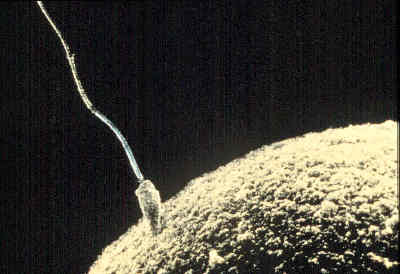 So much for the idea that the faster swimmer wins. Speed is no longer enough to cut it when it comes to sperm. From here on out, the little guys may be subjected to quality control as well. Scientists have developed a simple test that separates top-notch sperm from sperm with damaged DNA, reports LiveScience.

In a study appearing in the June/July issue of the Journal of Andrology, a group at Yale Medical School found that sperm screened with their test boosts the chances of pregnancy by 20 to 30 percent. And pregnancies that result from screened sperm may have a lower rate of genetic disorders and miscarriage.

To develop the test, the scientists let sperm loose near hyaluronic acid, a chemical found in the membrane of human eggs. The sperm that bound with the acid were then analyzed and found to have healthy DNA chains. Those that didn’t were more likely to be damaged, or what one of the researchers compares to “scratched CDs”.

The new procedure could change thinking about male fertility, turning focus away from quantity to the quality of a man’s sperm. Instead of just focusing on sperm count, doctors may also pore over semen samples in search of a few superior sperm.

The test may also prove crucial during in-vitro fertilization, where doctors sometimes inject a single sperm into an egg – and a swimming competition is out of the question.