If life exists on other planets, it won’t necessarily have the same carbon-based metabolism we do, so detecting its presence... 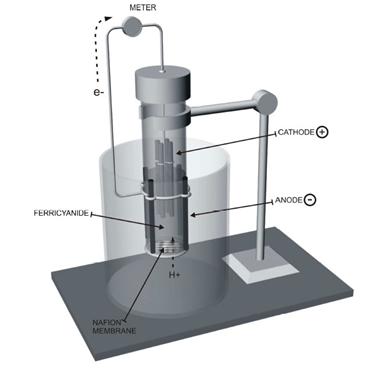 If life exists on other planets, it won’t necessarily have the same carbon-based metabolism we do, so detecting its presence will require some sophistication. Now, a group of Argentinian researchers say they’ve come up with a method that will work to detect any form of life.

Ximena Abreyava and colleagues suggest using a microbial fuel cell, which could detect life in a way that is independent of its chemical makeup, according to Technology Review.

The only requirement is that the life form in question must have a metabolic process of some sort — it must take chemical energy from its environment and use it to power itself. Consisting of an anode and a cathode, the fuel cell can detect the redox reactions of metabolism, which generate electrons and protons.

An anode is embedded in the medium to be investigated — Martian soil, for instance. It captures the electrons generated in the reduction-oxidization process. Protons pass through the membrane, completing the circuit. The amount of current flowing through the cell is a direct indication of life.

The fuel cell test needn’t focus solely on carbon-based life forms, which could come in handy if we ever send one to Titan,, which may harbor methane-based life.

The Argentinian team tested their contraption by comparing the results it produced from life-containing soil with sterilized soil. They say the power and current densities were much higher when the anode was embedded in soil samples containing life compared to samples that had been sterilized, according to Tech Review.

Not since the Viking Mars landers in the 1970s have planetary explorers been set up to look specifically for life forms. Instead, they’ve searched for water and other materials considered essential to life. The Viking landers sent back false positive results, essentially because Mars’ oxidizing environment tricked their life-hunting instruments.

Tech Review points out that the fuel cell test could lead to other false positives, if the sterilization process changes the soil chemistry in a way that reduces the power flowing through the fuel cell. The concept needs more work, but it’s a step toward a life-detector test for other worlds.