It’s easy not to think much about oil spill remediation technology until something like the BP Deepwater Horizon disaster happens,... 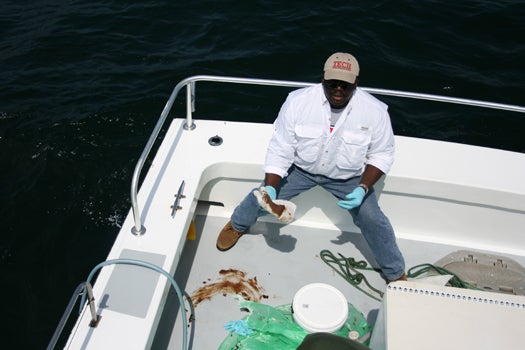 It’s easy not to think much about oil spill remediation technology until something like the BP Deepwater Horizon disaster happens, but materials scientists spend a lot of time thinking about how different materials respond to all kinds of offending substances. In the case of one Texas Tech University professor, a cloth wipe he developed to absorb and contain agents of biological warfare for the U.S. military can absorb 15 times its weight in oil while simultaneously detoxifying it. Paging BP.

Seshadri Ramkumar, who holds the excellent title “associate professor of nonwoven technologies” at Tech’s Institute of Environment and Human Health, developed Fibertect to protect U.S. service members in the event of a chemical or biological attack. The material consists of a fibrous activated carbon layer sandwiched between two layers of raw, nonwoven cotton. The cotton layers effectively absorb oil — even oil that’s dispersed in water — while the carbon core pulls it in and contains it.

To see this effect work in the lab check out the video below, but Fibertect’s commercial distributor, First Line Technology, wanted to see it work in the Gulf. The company sent a sales rep who also contracts with BP to try Fibertect out Grand Isle in Louisiana, one of the beaches contaminated by the ongoing oil leak. When Fibertect was placed on a blob of oil that had washed ashore, the oil stuck to the material and the Fibertect wouldn’t release it.

But what really sets Fibertect apart from other absorbent materials is its ability to also absorb and contain the toxic polycyclic aromatic hydrocarbon vapors that have been making cleanup workers sick along the Gulf shore. Its ability to contain both liquids and vapors makes it an ideal candidate for the kind of remediation efforts needed along the Gulf shore. Add to that the fact that Fibertect is fully biodegradeable — unlike many of its polypropylene counterparts — and Ramkumar and company could be onto something.

The video below shows Fibertect pulling motor oil right off the surface of a tank of water and holding onto the oil as the water drips back out. It’s easy to imagine the crews currently cruising the Gulf integrating a material like this into their booms and skimmers to mitigate damage to the coastlines, or to clean up oil birds and other affected wildlife.