A Japanese meteor-investigator probe will become a meteor itself when it returns to Earth over the weekend. The Hayabusa probe... 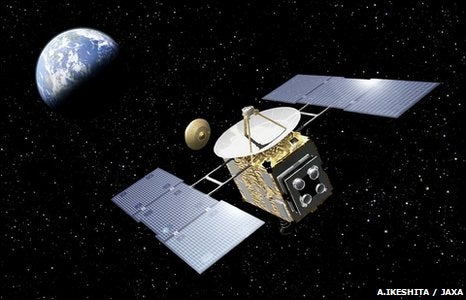 An artist's concept of the Hayabusa probe returning to Earth. Its sample return capsule will separate from the mothership and land in Australia Sunday. JAXA via BBC
SHARE

A Japanese meteor-investigator probe will become a meteor itself when it returns to Earth over the weekend. The Hayabusa probe is screaming toward Earth at asteroid speed,
according to scientists at NASA’s Ames Research Center. Scientists hope it is carrying samples obtained from a 2005 visit to the small asteroid Itokawa.

The probe’s sample-return capsule will separate from the main probe and reenter the atmosphere at 7.58 miles per second early Sunday. Scientists from NASA, the Japanese Space Agency and other organizations are planning to watch its fiery descent to learn more about how objects behave and break up during high-speed reentry.

When Hayabusa (“falcon” in Japanese) reaches an altitude of 190,000 feet, its heat shield will reach temperatures of more than 5,000 degrees Fahrenheit, while the gas surrounding the capsule will reach 13,000 degrees Fahrenheit  — hotter than the surface of the sun, NASA says. It is planned to fall over a large unpopulated area of Australia called the Woomera Prohibited Area.

There’s no guarantee of success — actually, scientists don’t even know if Hayabusa is carrying anything. The craft has been plagued with problems for five years.

It made two touchdowns on Itokawa in 2005 to collect rocks and soil, but apparently failed to fire a metal bullet designed to dislodge the samples. Then, a fuel leak left its chemical propellant tanks empty, so engineers had to use Hayabusa’s ion engines to guide it home. Still, Hayabusa was the first spacecraft to land on a celestial object other than the moon and take off again.

Regardless of its payload, there’s still plenty to be learned from the spacecraft’s return. A team of astronomers from Ames and JAXA, the Japanese space agency, will fly at 39,000 feet with a slate of instruments to measure the physical and chemical changes happening to Haybusa’s heat shield. The data can inform computer models that simulate reentry conditions.

Scientists will also watch as the main spacecraft breaks up, to validate computer models that predict how an object will fragment when it reenters the atmosphere at high speeds.