The European Southern Observatory’s newest telescope has collected its first images of the cosmos, capturing some stunning images of the... 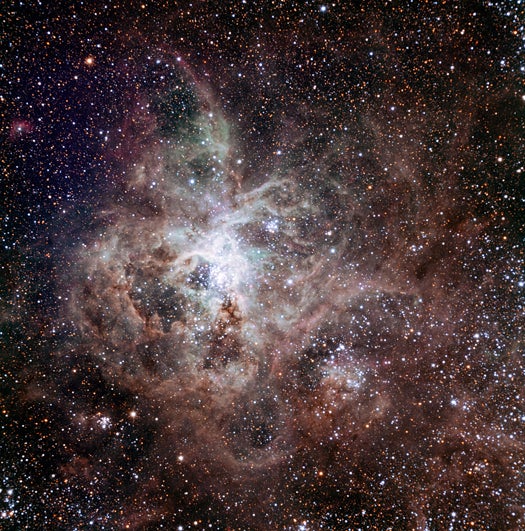 The European Southern Observatory’s newest telescope has collected its first images of the cosmos, capturing some stunning images of the Tarantula Nebula and making a good case for the virtues of telecommuting. Trappist, as the telescope is called, resides at the La Silla observatory on the edge of the Atacama Desert in Chile, but it is operated from a control room in Belgium, nearly 7,500 miles away.

Trappist (TRAnsiting Planets and PlanetIsmals Small Telescope — kind of a stretch for an acronym) is joining in the search for exoplanets, Earth-like rocky bodies orbiting distant stars that are quite en vogue in the astronomical community right now. Such planets are clearly the best place to start looking for extraterrestrial life, and in recent years astronomers and governments have been devoting increased resources to identifying them. Trappist will also employ special filters to study molecules ejected by comets orbiting the Sun in hopes of gaining a better understanding of how comets may have contributed to the advent of life on Earth.

The image above shows the Tarantula Nebula, so named for the bright wisps of gas and dust that have been likened to the legs of a tarantula. The nebula is located in the Large Magellanic Cloud, one of our closest galactic neighbors.