After Cosmic Collision, A Jellyfish Galaxy With Tentacles of Stars 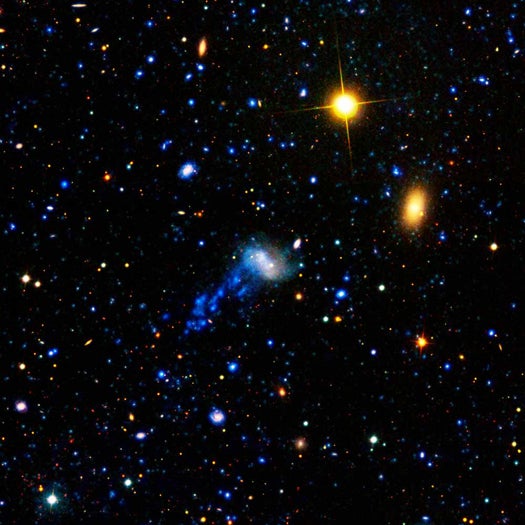 A 2-million-mile-per-hour collision in a galaxy cluster 54 million light years away has left us with this amazing image captured by NASA’s Galaxy Evolution Explorer (GALEX) observatory. But aside from being cosmically stunning, the collision and ongoing observations of the star-spangled tail it produced should give astronomers a better grasp of the mechanisms behind star formation.

The tail is the result of galaxy IC 3418 and one of its neighbors in the Virgo galaxy cluster smashing together violently, blowing out a stream of gas in its wake. This isn’t unexpected, but what interests astronomers are the stars that seem to have formed within the tail. The gas blown out of the collision is lighter than what’s necessary for star formation, as heavy gasses don’t blow out during galactic collisions. That means somehow those lighter gasses are forming heavier gasses within the wake.

This offers the first hard evidence that molecular hydrogen will form under the turbulent conditions of a collision’s wake, and being able to observe the individual factors influencing star formation from the very beginnings of light gasses should lend astronomers a lot of insight into how stars form.