Astronomers Capture First Images of an Exoplanet Orbiting Its Star

For the first time, astronomers have been able to follow the path of an exoplanet as it orbits its star,... 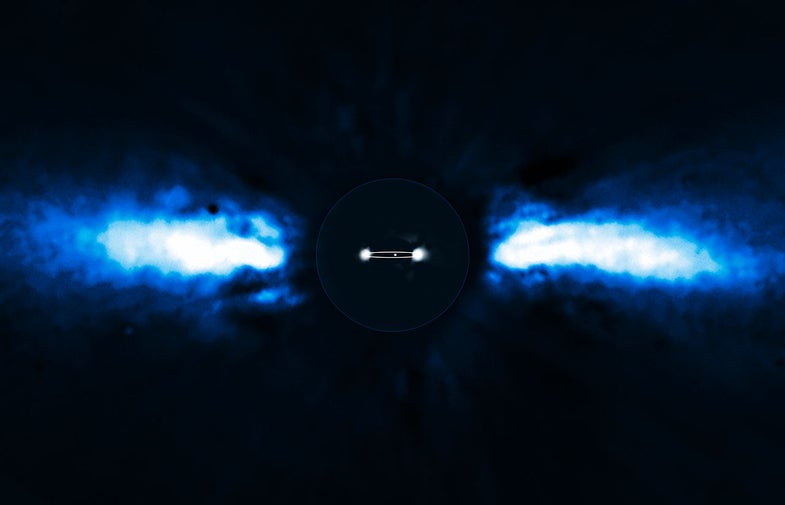 This composite image shows a huge planet orbiting a nearby star, Beta Pictoris. The pale dots inside the dark disc are pictures of the planet in 2003 and 2009. ESO
SHARE

For the first time, astronomers have been able to follow the path of an exoplanet as it orbits its star, a breakthrough for planet-hunters and anyone interested in how planets are made.

The image above is a composite of images from the European Southern Observatory’s Very Large Telescope, showing a planet orbiting the nearby star Beta Pictoris. The dark circle in the center is from a piece of metal that blocks Beta Pictoris’ bright light, allowing observations of the fuzzy planetary disc around it.

The star and the planet are both fairly young; Beta Pictoris is just 12 million years old, a fraction of the Sun’s age. The fact that there’s already a planet orbiting it shows that planets can form very quickly, in as little as a few million years.

Astronomers have long known about the planetary disc around Beta Pictoris, which is pretty close to our solar system at just 63 light years away. They also knew the disc was warped, and that comets were falling into the star, suggesting the presence of a huge planet.

In 2003, they first noticed a pale dot near the star, but they couldn’t be sure it was a planet. Later, the pale dot disappeared, but it came back in fall 2009 — on the other side. This was conclusive proof that it was a planet, and it had been hiding out either in front of or behind the star.

Scientists say the planet, which they’ve nicknamed Beta Pictoris b, is about nine times bigger than Jupiter, and it’s about as close to its star as Saturn is to our Sun.

Astronomers only have about 10 pictures of exoplanets, so each new snapshot is a monumental discovery. But this one is especially cool because astronomers can see it moving around its sun. More pictures like this should start coming from theKepler mission, which is designed to stare at individual stars and watch as planets move around them.

The Beta Pictoris b discovery is also neat because it’s the closest to its star of any exoplanet imaged so far. Most are as far from their stars as Neptune is from the Sun, which means they probably formed differently than the planets in our solar system. This one, astronomers think, might have formed just like ours. And, we can speculate, Earth-like exoplanets may house Earth-like life.