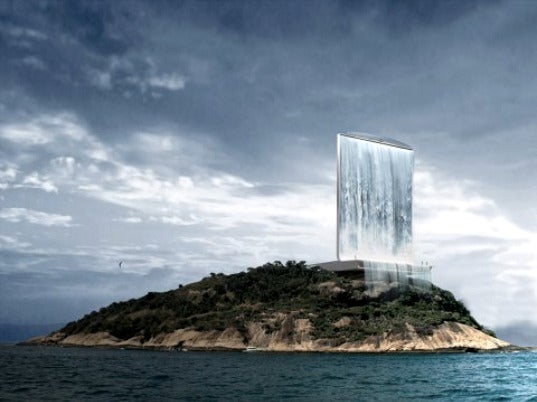 Several past Olympic hosts have promised greener events, but Rio de Janeiro could set a new standard with a solar-powered artificial waterfall building that operates day or night. The eye-catching Solar City Tower represents one of the standout entries in the International Architecture Competition for the Olympic Games 2016, according to TreeHugger.

The tower uses many solar panels and a solar power plant to produce energy for the Olympic village by day. Any excess energy goes toward pumping seawater up into the tower for storage, so that it can be released by night as a spectacular waterfall. The falling water would also help turbines create electricity for the nighttime village.

That neat energy storage scheme proposed by the Swiss firm RAFAA is similar to many that exist for solar power or other renewable energy today, except on a much larger scale.

Anyone not impressed with either the energy solution or aesthetics can still enjoy social gatherings and events held within an indoor amphitheater, along with a cafeteria and shop situated beneath the waterfall. Bolder visitors can catch a breathtaking 360-degree view of the city from the observation decks and urban balcony, or even do a little bungee jumping from 90 stories up.

Rio de Janeiro has already promised the first zero-carbon Olympic Games, and started by planting 3,580 saplings last September to offset all the carbon emitted during the city’s bid to host the games.