A message from Chinese scientists: “Stop throwing out your cigarette butts!” Researchers have devised a financially viable process for recycling … Continued 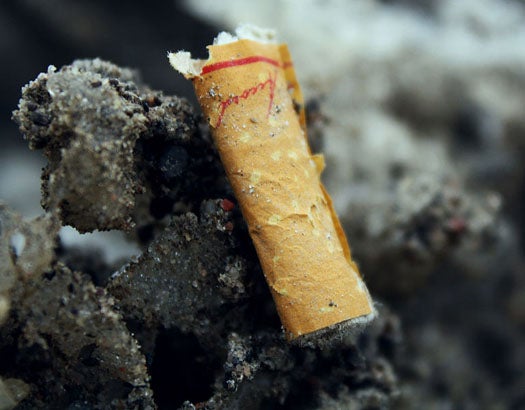 A message from Chinese scientists: “Stop throwing out your cigarette butts!” Researchers have devised a financially viable process for recycling cigarette leftovers to extract chemicals present in the filters. And doing your part to recycle cigarette butts could help save one of our most precious resources — oil companies.

That’s right, oil companies. Cigarette butts contain a lot of chemicals, nine of which can be extracted and turned into compounds that are highly effective at preventing corrosion of a kind of steel widely used in the oil industry. Constantly replacing rusting pipes is a serious financial drain on oil producers worldwide, and a better anti-corrosive would help curb those costs.

Of course, the public isn’t exactly drowning in warm, fuzzy sentiments for Big Oil right now (thanks, BP). Which makes the timing of such an announcement somewhat bizarre. But it’s worthwhile to consider the upside to such a proposal. Cigarette butts can survive for up to 15 years in the sea (they’re toxic to some fish), and 4.5 trillion of them make their way out into our ecosystems every year. So simply by collecting and disposing of cigarette butts in some kind of organized manner, there’s a built-in benefit to all of us.

All that aside, oil companies — as much as we all like to say horrible things about them — are not going anywhere as long as we remain addicted to the product they peddle. But better anti-corrosives could help keep pumping equipment in top form, making calamities like the one we’re currently dealing with less frequent. In theory, it could even drive the price of oil down ever so slightly.

A reasonable plan for collecting and recycling cigarette butts won’t be in place anytime soon, but if anyone is poised to lead the way it’s the Chinese. With 1 billion people and a certain penchant for tobacco, the Chinese consume a third of the world’s smokes.