How many cats have to be both dead and alive before researchers are content that they’ve entangled enough particles? The... 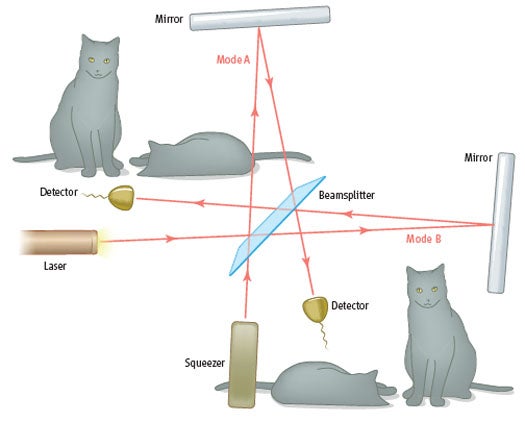 How many cats have to be both dead and alive before researchers are content that they’ve entangled enough particles? The current count is now five, but research published today in the Science suggests that it could be many more than that. Perhaps that’s bad news for Schrodinger’s cat, but it’s great news for quantum pursuits like precision imaging and ultra-fast computing.

Israeli scientists have for the first time developed a technique that can entangle numerous particles at the same time — meaning each particle (in this case photons) exists in two possible states at the same time — and demonstrated it on a set of five particles. When particles are entangled, exerting a change on one also exerts a change on the other, even if the two are separated by miles or even light years.

Einstein called this “spooky action,” but taking advantage of quantum entanglement has already yielded some pretty amazing results in the realm of data encryption, and by creating larger and larger entanglement systems scientists might someday be able to build quantum computers that make today’s “zero-or-one” computing systems look primitive.

Quantum computers can carry out computations exponentially faster than traditional computers because rather than being limited by the “on” or “off” nature of semiconductor chips, quantum systems can calculate several solutions to the same problem at the same time.

But the big news from the Science paper isn’t just that researchers were able to entangle five particles at once, but that the technique for doing so appears to be scalable to just much higher numbers of photons. There’s some trade-off here; the entanglement between particles is less than absolutely perfect, but it still retains the useful properties that researchers are looking to exploit.

Unfortunately the quantum states of these particles are quite fragile, so while researchers can demo this technique in the lab, next-generation computing is still a good ways off. But a scalable, demonstrable technique for entangling multiple particles is a big step toward the kinds of quantum systems that could rewrite the underpinnings of modern computing.