Physicists have long been able to “ghost image” — that is, to use a split laser beam to detect the... 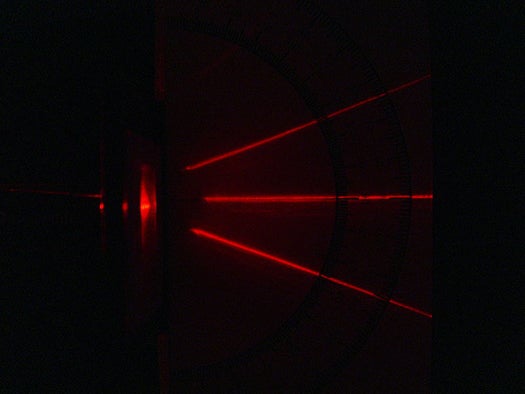 Physicists have long been able to “ghost image” — that is, to use a split laser beam to detect the presence of an object without actually seeing or interacting with it — but the process is complicated and can take a while. Now physicists at the University of Rochester’s Institute of Optics say they’ve devised a simpler means to detect the presence of a known object using a single photon.

Ghost imaging involves splitting a laser and firing the beams at two different photon detectors, one of which is behind the target object and one of which is set up as a “camera.” The laser will at intervals produce two identical photons simultaneously, and from those simultaneous hits on the photon detectors — the first detector won’t register any photons that bounce off the target — an outline of the object is created at the “camera” detector.

While this is a cool concept, with an even cooler name, it’s short on practical uses. It takes a while for the laser to produce all the identical photon pairs you need to get a full image, and aside from that, it requires a pretty complex setup. But if you could identify an object with a single pair of entangled photons, you might have something useful on your hands.

Physicists think they’ve achieved exactly that using a holographic plate, though thus far the technique only works for transparent objects. The plate must be encoded with the signatures of known objects in advance by firing the laser through them. The initial beam is forced to interfere with a second laser on the other side, a reference beam coming in from a different direction whose interference creates a unique signature for the object that is encoded into the holographic plate.

By repeating that process for various objects, a single holographic plate can hold up to 10,000 signatures. It can then be integrated into the ghost imaging process, replacing the “camera” detector.

Once again the laser beam is split, with two entangled photons fired in different directions, one at the target and one at the holographic plate. The photon that hits the target will be altered by it, as will its entangled counterpart. When the second photon hits the holographic plate, its diffraction will correlate specifically to one of the signatures previously embedded there. By measuring that diffraction, researchers can identify what the target object is without ever seeing or coming in contact with it.

The technique is rudimentary at this point, and to have much real-world application it will have to be able to work on opaque targets as well as transparent ones. In such situations where its important that you identify an object without exposing yourself — say, if you want to know if a faraway ship or airplane is a friendly or a foe without going in for a closer look — it could prove to be an important tool.